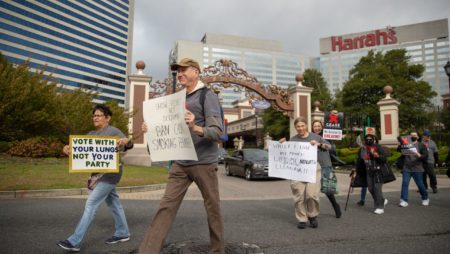 Atlantic City casinos are being targeted by anti-smoking proponents who believe the time to close gaming’s clean indoor air loophole is long overdue. However, word this week from the state’s most powerful lawmakers says that activists are persuading those in charge.

Yesterday, the American Cancer Society held its “Great American Smoke out,” an annual event encouraging smokers to stop their habits. Anti-smoking proponents in New Jersey had hoped that the campaign would induce state representatives in Trenton to finally push for a bill to ban indoor smoking on casino floors completely.

However, when asked for comment on such a bill, New Jersey Senate President Stephen Sweeney (D), a lame-duck following his almost unthinkable election upset earlier this month, said no such undertaking is underway.

“We haven’t even started to talk about it (Banning casino smoking),” Sweeney responded to a question during a grand opening event of a new ShopRite grocery store in Atlantic City. “The governor, myself, and the Assembly speaker have to get together and decide which bills we are going to move forward.”

Sweeney, a long proponent of the Atlantic City gaming industry, is expected to depart office in January after 20 years in elected office.

Governor and President at Odds

Sweeney’s revealing that the top representatives in the New Jersey capital have not engaged in serious conversations to end casino smoking in Atlantic City go against Governor Phil Murphy’s (D) recent evident enthusiasm for such an effort.

During an interview in September, Murphy, who narrowly escaped being unseated by his Republican opponent, said he would “unequivocally” sign a bill that would end casino smoking. But two months later, it looks, at least according to Sweeney, that no such serious discussion concerning the issue has happened.

“Senator Sweeney’s comments yesterday could not be more out of touch with the unacceptable reality we face at work every day,” Pete Naccarelli, Casino Employees Against Smoking’s Effects (CEASE), stated. “We have been calling on him for months to take action to close the casino loophole, so this is not new to him.”

Sweeney has not acted on casino smoking during his first days as a lame duck. However, he pushed legislation that could reduce the amount of facility tax payments the casinos might pay in the coming years.

“Why is he moving quickly to give casinos a tax break but leaving us behind? We need him to take action. We will not forget who fought for us and who did nothing,” warned Naccarelli.

Murphy doesn’t have the power to singlehandedly end casino smoking. The assembly must first act, and some state legislators are trying to do just that.

S.1879 wound end the smoking ban exemption for Atlantic City casinos. The current version of the legislation was introduced back in February 2020. However, similar attempts have floated the Trenton capital halls for the last few years.

Sweeney’s political track record concerning Atlantic City has been one that usually aligns with the casino industry. The New Jersey town’s Casino Association maintains that a complete ban would affect business and reduce jobs and less tax money for the state and Atlantic County.

“We are grateful for the governor’s clear answer that he would sign legislation to close the casino loophole,” president and Americans for Nonsmokers’ Rights CEO Cynthia Hallett said.

“However, we know that Senate President Sweeney, in particular, stands in the way. The governor must go further and publicly call for Senator Sweeney…to send a bill to his desk in the lame-duck session.”