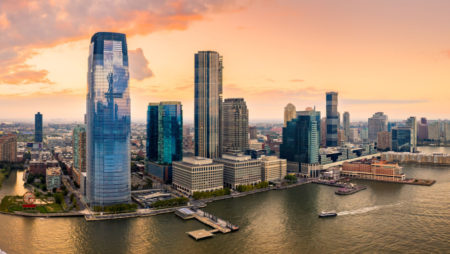 Evolution, a provider of online gaming services and entertainment, announced the inauguration of its second live casino studio in New Jersey on Thursday.

According to Evolution, the new studio opened on November 10, 2022, even though the news was made on Thursday. It is hardly surprising that the Division of Gambling Enforcement, the state’s gaming authority, granted the business permission to construct a second live casino studio site in New Jersey.

The First-Person mode, which was released in September, is also accessible to users.

“This is a significant step forward for our business in North America,” said North America CEO Jacob Claesson.

“Our objective in this business has always been straightforward: to provide players with the best possible fun while providing our operators with the games and resources they need to remain competitive.

Evolution constructed the studio because of the high demand in the state. It will contribute to the company’s growth in the coming years. It is intended to provide the company with the space necessary to continue introducing new games to New Jersey players.” he concluded.

During the soft launch of the New Jersey online casino, PlayStar collaborated with Evolution and other software developers to offer a diverse selection of games.

Similarly, Evolution offered live dealer craps to Pennsylvania online casinos in August of this year. The corporation then announced its intention to increase the number of live crap dealers soon.

In October, Evolution released its quarterly financial report. For the quarter ending September 30, the B2B online casino services provider earned a total of EUR 378.5 million ($379.1 million), an increase of 37.1% compared to the previous year. The company’s EBITDA increased by 35.3% from 261.0 million euros ($261.4 million), giving it a margin of 69%.

The recent second studio in New Jersey Evolution launch contributes to the company’s continuous expansion. This is the fifth studio serving the expanding iGaming business in the United States. In addition to New Jersey, Evolution is the first company to offer Live Casinos to gamers in Connecticut, West Virginia, and Michigan.

Claesson stated that Evolution would hire additional personnel in the next weeks and months as the company attempts to expand and add more tables and games. Lastly, he stated that the company is establishing a great team in North America and providing interesting new opportunities for operators and gamers.

Mobinc, a provider of platforms, has announced a new relationship with Evolution, one of the largest providers of Live Casino products in the iGaming industry. The new partnership will aid Evolution in promoting its Japanese-themed table games. This will aid the company’s expansion and increase its global reach.

The game is broadcast live from a casino-based studio. This gives gamers the same experience they would receive at a physical casino. Mobinc also allows gamers to access and play its games on iOS and Android devices. The manager of Mobinc Casino, Alex Bolton, was pleased with the cooperation and said it was a pleasure to collaborate with a reputable firm like Evolution:

Japanese-themed table games from Evolution promise to be entertaining and engaging to play. For instance, Japanese Roulette utilizes cutting-edge streaming technology to provide gamers with a real-life casino experience from the comfort of their own homes.