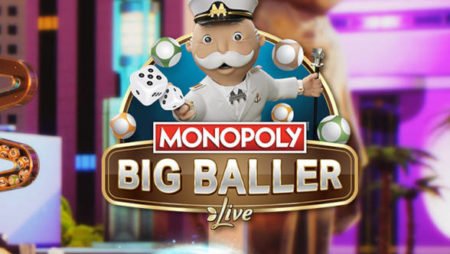 Evolution Gaming has once again created an entertaining game with Monopoly. This version of the dream catcher is based on a widely played board game of the same name.

Monopoly Big Baller is a new bingo game for corporate partners like a live game show. The game features both a human game host and an automated ball-picking machine.

The bonus rounds of Monopoly Live have contributed to some of the most significant wins in online casinos. Due to this, Monopoly Big Baller Live was developed by the leading live casino software developer.

In this game, the stakes are significant because you’re battling for enormous prizes concealed therein. It includes abundant fascinating features and payouts that make it a joy to play.

The live game Monopoly is based on the popular board game with the same name. In addition to being played with a dreamcatcher, there is a bonus game.

Currently, Hasbro controls the Monopoly trademark and intellectual property, and it grants Evolution a license to use them. Casinos that run the Evolution software will be able to offer it in the summer of 2022.

Unlike Evolution’s more traditional Monopoly Live, the “bingo-style” Monopoly Big Baller is based on the popular board game.

The game features Mr. Monopoly in augmented reality and several multipliers that boost the amount that can be won. A live game presenter and an automated ball-drawing system are also included.

Similar to Evolution’s Monopoly Live game, Monopoly Big Baller is based on the world-famous board game and includes dice rolling, “Chance” and “Free Space” cards, “Go to Jail” sections, and other elements.

Most live game shows occur in unusual or exotic locales, and the hosts wear costumes and other fancy dress. Monopoly Big Baller is no different. Big Baller is similar to the popular Hasbro board game but takes place on a riverboat rather than in a city.

Then, the participants must line up the correct number combinations. Other bonuses will be woven within the action, which will make it more surprising and keep the audience engaged between sessions.

A host dressed as a sailor will be there to entertain you while you go down a lovely river at the beginning of the game.

In the center of everything is a tombola, formerly used to select bingo balls randomly. When the game begins, the tombola picks 20 numbered balls. If any of these digits match a number on one of your cards, that card is “daubed” automatically.

The objective is to complete as many lines as possible on your card to win extra prizes.

Monopoly Big Baller is a brand-new live game show that looks and functions considerably differently than the others. And at the heart of this new game is the same fantastic Bonus Round from our first Monopoly Live game, which is now even better because participants receive more rolls.”

The new game stands out due to its unique concepts and visuals. Keep your eyes peeled for the Bonus Round. The popularity of the Monopoly brand aids the game’s success. According to Haushalter, the concept behind the board is well-known and appreciated worldwide.

Like Mega Ball, Monopoly Big Baller pits the player against the casino. To win prizes, you must draw lines. The game now requires you to hold four cards. Chief Product Officer Haushalter explained that there are four cards because players will have to pay keen attention to them.

Haushalter added, “Monopoly is such a popular brand, and the board game’s central concept is well-known and adored worldwide.” Monopoly Big Baller blends this brand value into a new online live game show that will appeal not only to Monopoly and bingo lovers but also to a broader audience.”