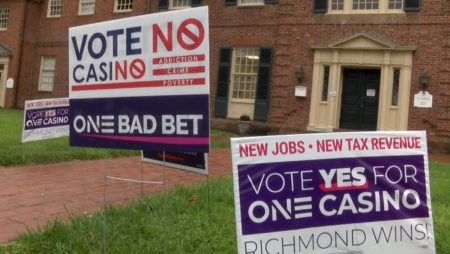 The company behind the Richmond casino referendum that voters rejected last month is considering a campaign to ask the question again to the residents in the Virginia capital.

Urban One, a national media conglomerate focused on Black America, partnered with casino operator Peninsula Pacific Entertainment (P2E) to propose a $565 million gaming resort next to the Phillip Morris tobacco plant along I-95.

Richmond residents narrowly rejected the local referendum during the November election. Nevertheless, that disappointing result has not wholly ended Urban One and P2E’s casino ambitions for Virginia.

According to the Richmond Times-Dispatch, an effort is underway to ask Richmonders again about a casino. This time, messaging that hones in on the various benefits of allowing the more than half of a billion-dollar investment to proceed will be developed. Richmond City Councilwoman Reva Trammell confirmed that a signature collection process is underway for a second gaming referendum initiative.

Richmond residents have recently reported being contacted by polling service to weigh how they voted in November and why. Although Urban One and P2E have not confirmed they are behind the surveys, the pollster’s excise could hint that the casino union is not ready to fold on the capital area.

“Clearly, they think that with slightly different messaging they would have the opportunity to win if it came again,” a veteran political analyst and former Virginia Commonwealth University dean, Bob Holsworth told the Times-Dispatch.

Holsworth explains that P2E and Urban One believe the odds of getting authorization from residents would be better if they more strongly promote the financial benefits the casino would deliver to Richmond.

There are no solid laws that would prevent Richmond from holding another gaming referendum. However, the city would presumably require to reopen the bidding process and choose a casino proposal before taking it before voters.

Soon after Richmond voted no to a casino, executives in Petersburg publicly announced their willingness to welcome such a resort. Located around 20 air miles south of the Virginia capital, Petersburg Mayor Samuel Parham says his town is ready for the project.

Parham reveals that “some of the casino guys” who were in Richmond have recently been exploring Petersburg. Parham is joined by some state legislators looking to Peterburg following Richmond’s rejection of the casino.

“It can transform the City of Petersburg,” Parham declared.

The path for a casino question before Petersburg residents is much more complicated than asking Richmond voters the question again. That is due to the commercial gaming law Virginia passed last year. That law only allows certain cities with myriad economic hardships to ask their residents if they want to use casino development to boost the economy.

Unlike Richmond, Bristol, Danville, and Portsmouth, Petersburg did not meet all the qualifying requirements. For a casino referendum to reach the polls in Petersburg, a state legislative effort is needed.

That effort will presumably get significant opposition from the casinos constructed in Portsmouth and Norfolk since Petersburg is between Richmond and the Hampton Roads region.

Portsmouth, Danville, Bristol, and Norfolk passed local casino referendums during the 2020 vote, and all four cities did it convincingly.

Richmond chose to wait a year due to considerable interest from casino companies.