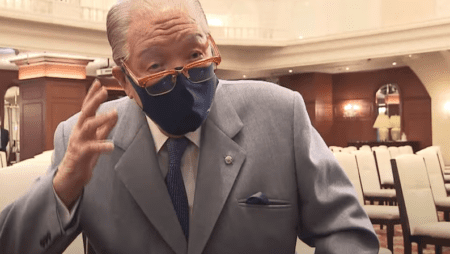 A Yokohama entrepreneur with great fame in the Japanese city is vehemently opposed to bringing an integrated resort (IR) in the region.

Due to his strong influence on commerce and political circles across Yokohama, Yukio Fujiki is popularly known as Don of Hama. The 90-year-old man has held various influential positions in his extensive business career.

In a conference with Japan’s Foreign Correspondents’ Club this week, Fujiki didn’t hem or haw. He revealed his resentment concerning casino betting, which is likely to arrive on Yokohama’s Yamashita Pier. Both Melco Resorts and Genting Group have already proposed Integrated Resorts in their region.

Fujiki proclaimed, “There are many people betting their lives away, but I will not allow a casino in Yokohama. I will never allow it.”

Fujiki warns to take his own life should an integrated resort somehow manage to get approval and come to Yokohama’s premier port.

He said, “If a casino happens, I will commit seppuku and die on its opening day.”

Seppuku is a Japanese form of custom suicide where individuals stab themselves in the abdomen, heart, and throat. In samurai tradition, seppuku is a means of dying with honor instead of falling into the hands of your enemies.
Inside Asian Gaming, which was first to report on Fujiki’s utterance, said that it is difficult to tell Fujiki’s decision for warning to take his life and his actual intention to do the act.

The Yokohama’s odds of getting one of the three commercial integrated resort permits from the central government of Japan will highly depend on the next city mayoral election result.

The LDP has majority rule in Japan’s assembly, the National Diet. The LDP heeded the call of the preceding prime minister Shinzo Abe to legalize betting. Abe’s successor, Suga, is moving on with the mission to expand Japan’s tourism industry.

Nevertheless, not all members of LDP agree that casinos are a logical way to pull in tourists. Hayashi is being challenged by Hachiro Okoboji, an LDP member, and a former Diet official. In June, the ex-National Public Safety Commission head and the Diet’s Casino Regulatory Commission chair shocked the country after resigning from the assembly to challenge Hayashi.

In June, Okonogi proclaimed, “I’m running in order to stop the casino effort. Many individuals oppose the plan, and the environment in Yokohama is not right for it now.”

The mayoral election is swarming, among the nine aspirants being Hayashi and Okonogi, who have formally affirmed their candidacy. The election will be held on August 22.

In June, Fujiki announced his retirement from serving as chair and managing director of his family’s Fujiki Transportation and Stevedoring business firm. However, he remains chair of the Yokohama Port Harbor Resort Association.

In his statement, Fujiki stated that he decided to focus more energy on opposing the effort to bring casino in Yokohama. The former is supporting Okonogi for the mayoral election.

Fujiki affirmed, “Hachiro will win the election. It must be Hachiro who wins.”

Hachiro is running as an independent candidate and has promised that, if voted in, he will cancel the city’s proposal for an integrated resort, something Suga supports.

However, with so many individuals competing for the anti-IR vote, they might end up splitting that vote into parts too little for one to win on their own, thus giving the election to a candidate who controls all the pro-IR, who is Hayashi. According to the rules, to win an election, a candidate must obtain at least 25% of the votes cast, which is possible for Hayashi but hard for her opponents.