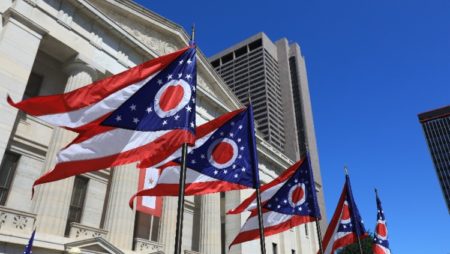 Ohio is on the edge of becoming the 33rd state to legalize sports wagering. On Wednesday, both the state legislative chambers overwhelmingly passed House Bill 29. That’s after a legislators’ conference committee from the House and Senate agreed on the bill.

After 72-12 votes in the House and 31-1 in the Senate, the legislation now heads to Governor Mike DeWine’s desk. The Governor has previously expressed he would sign the proposal into law.

As expected, if that happens, it would end years of discussions among legislators in Columbus and set the stage for a launch no later than January 1, 2023. However, state executives are optimistic the first bets will be placed well before time.

The legislation creates three types of permits to offer sports wagering. It allows for more than 40 brick-and-mortar sportsbooks across the state. Furthermore, at least 25 mobile licenses will be made available, with Ohio’s casinos, racinos, and professional sports teams eligible to partner with operators on those. In addition, certain by-the-drink alcohol facilities will be able to house kiosks.

Although the Ohio Lottery will run kiosks, the state’s Casino Control Commission will have regulative authority over sports wagering.

Lots of give and take

After competing bills in the Senate and House failed to make it out of the assembly last year, Ohio legislators pressed the reset button as they entered on a new-year session in January.

Schuring took over leadership on the legislation and became chairman of a special committee on gaming that met for weeks to receive allegations from major stakeholders and interested parties. The goal was to establish a free-market sports wagering system that included retail sportsbooks throughout the state.

In mid-June, the Senate passed a 30-2 margin sports betting bill. The aim was that the House would take it up quickly and pass it before the summer break. When the hopes for that diminished, Schuring and other Senate leaders took HB29, which was legislation about identification cards for veterans, and included the sports wagering language.

However, House leaders again declined to act, forcing the call for a conference committee.

House Majority Floor Bill Seitz, R-Cincinnati, said leaders from both chambers had held discussions for six months, and the final legislation was the result of about 50 amendments.

Seitz said, “This represented a lot of give and take. A lot of compromises. A lot of wrangling over seemingly innocuous words, but that’s how it is with complex legislation.”

With a population of 11.8 million, Ohio would become the fourth-biggest state in the US to legalize sports wagering, after New York, Illinois, and Pennsylvania. Legislators in Florida, the nation’s third-biggest state, approved statewide sports wagering as part of an amended gaming agreement with Seminole Tribe. However, a federal judge nullified that compact. The tribe is currently appealing that ruling.

Once operators get the green light to start, Ohio could find itself among the nation’s leading sports wagering market quite quickly.

According to the financial record on the conference committee bill, the Ohio Legislative Budget Office expects the state’s sports wagering market to be around $3.35 billion after some years of operation.

The bill requires a 10% tax on gaming receipts, defined as revenue deducted by paid winnings and canceled bets. In 2027, sports wagering operators would also be able to deduct a portion of their credits from their pre-tax receipts.