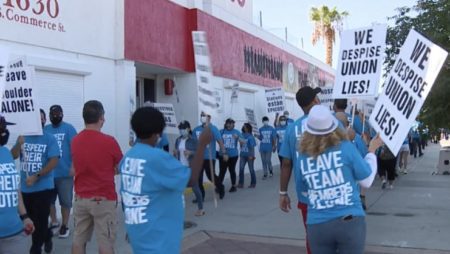 Station Casinos staged a protest Sunday afternoon outside the Culinary Union headquarters in Las Vegas. The workers planned the stunt to express the casino firm’s frustrations with the labor union.

The National Labor Relations Board (NLRB) handles the lawsuit. In the meantime, however, a federal government court judge has directed Station Casinos to start early talks with the casino union, something the firm says would lead to “irreparable harm.”

A firm statement stated, “As has already been reported, in the last year, a majority of Team Members at both Palace Station and Boulder Station flat-out rejected the Culinary Union. The Culinary Union has refused to accept that outcome and has filed charges with the NLRB to reverse the decisions.”

The release further added, “The Company demands that the Culinary Union respect and stop trying to overturn the wishes of the Palace and Boulder Team Members.”

Arguello-Kline said, “It seems that Station Casinos is simply trying to bring public attention to the wide-ranging allegations of legal misconduct it faces.” “In our nearly nine decades of organizing, the Culinary Union has never seen company managers or supervisors’ picket, especially on their day off, when it is 99 degrees outside. We hope that they stay hydrated and cool today.”

The Station demonstrators, however, found no humor in the protest.

“We are here to send a message to the Culinary Union to leave us alone,” Hernan Andrade, internal maintenance director at Red Rock Casino, told the Las Vegas Review-Journal. “Team members are furious. They just don’t want a union.”

In addition, Station denied claims that the picket only involved supervisors and management level workers. The Station stated that hourly Team members willingly joined the demonstration on their own time.

The NLRB review essentially comes down to whether Station Casinos has continuously increased worker benefits at its casino ahead of worker votes to unionize.

Culinary executives and NLRB Area Director Cornell Overstreet contend that Station’s benefits rattles have unfairly impacted unionization vote results. Overstreet also argues that Station Casinos engaged in a plan to use furloughs during the COVID-19 pandemic to deter unions representing or seeking to represent their workers.

However, Stations rejects those claims, contending that Overstreet is biased and unjust in her judgments.

The Station Casinos and its billionaire owners Lorenzo and Frank Fertitta III have long disagreed with unions. Las Vegas casino union executives, besides the National Labor Relations Boards, the latter being the complainant in the ongoing case against Red Rock, insist the casino increased benefits ahead of a designed union vote among employees to influence some to the firm’s side.

The benefits, the NLRB claims, unlawfully impeded with employees’ rights to determine whether to unionize.

In the court filing, Overstreet said, “Internal communication among Red Rock’s executives show that the promised and granted benefits were formulated with the state’s purpose of undermining the union’s appeal. And that the announcement of those benefits was intertwined with anti-union messaging and timed to deter the union’s organizing effort.”

The benefits increase included free health care for employees earning less than $41,600 annually or those who make under $20 per hour.