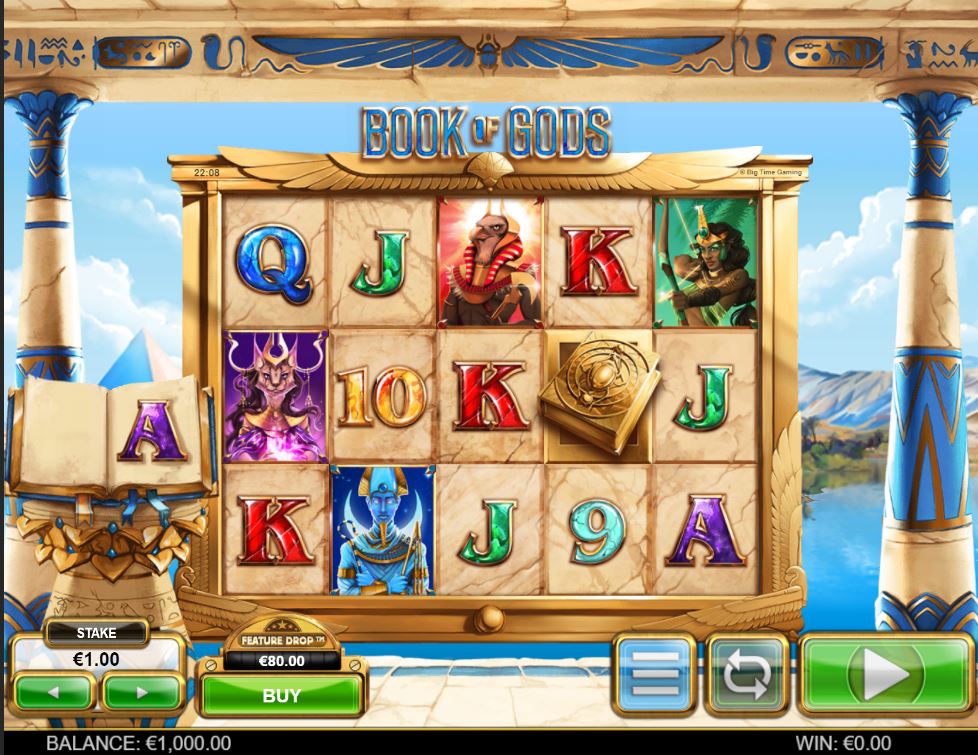 Big Time Gaming has taken the slot machine industry by storm in 2018, and one of the games with which they managed to capture the imagination and the hearts of so many players is this Book of Gods. The developer has become known for very high-volatility slots, with huge potential, the kind of game a pro player would want to try.

Despite the fact that the Megaways system is the one that made them famous, Book of Gods works in a different way, which proves that BTG continues to innovate. They’ve used just 243 ways to win for a game area with 5×3 reels. Symbol Cloning is the unique feature that gives the game its high potential, when used during free spins at least. Other features involve the wild/scatter and the Feature Drop option. Its top win potential is 4860x total bet, or $194,400.

These slot machines that are coming from Big Time Gaming all tend to work the same way betting wise. You are asked to select the total amount that’s going to be used, and here the range for it will be $0.10 to $40.

Another cost that you can have as a player, comes in the form of the Feature Drop option. Found right next to the Stake, it will cost you 80x the usual bet, so you can pay up to $3,200 to use it. In exchange, you get immediate access to the slot’s bonus feature, which has the highest potential. 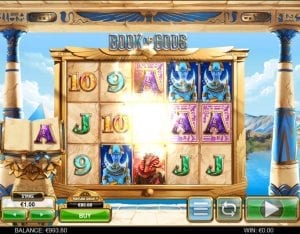 Whether you’re in the base game or during the free spins, the best single combo you could form will pay 30x the bet, via the Wild Book of Gods. It’s not one of the symbols that can be used in the Symbol Cloning process, so it will not fill an entire screen at the same time. For that, look for the high-paying Gods, the best one offering 20x the bet for each combo. Given the number of ways to win, a screen filled with Purple Gods will pay 4,860x the bet, or a maximum of $194,400.

For a high volatility game like this one, the 96.35% is even less relevant than in a regular slot machine. It’s just going to tell you how much the slot pays back over its entire lifetime, but it’s not relevant for the outcome of your own gaming session.

It’s the features that allow Big Time Gaming to be so popular and unique, and Book of Gods doesn’t disappoint. It’s mostly the Symbol Cloning feature that does the heavy lifting in this game, and it’s during the free spins that it truly reaches its maximum potential. More on that below.

Whether you’re looking for the combination that will pay the most in this game, for the symbol that triggers the free spins or which acts as a substitute, the answer in each case will be the Book of Gods icon. On its own, you will have it as a wild and often enough you will get new wins just because it’s on the right reel at the right time. Other times, you might get these symbols to appear two or more times, from left to right, and then you will get its own rewards which can go up to 30x the bet. Get enough of these symbols, and the rewards will be accompanied by access to the free spins.

For every round you are in, you will have the Book of Gods reveal one of the Royals, to the left of the game area. That will be the Cloning Symbol for the round, and once you get your wins paid, they will be expanded and will fill the reels they appear on. The way to take advantage of them is to have these symbols appear from left to right, and on at least three reels. They’re not worth much in the base game, since only the Royals can get cloned there, but the feature becomes a lot more valuable during free games.

3, 4 or 5 Book of Gods scatters will trigger for you 15, 20 or 25 free spins. The feature starts with the Book of Gods appearing and revealing one of the high-paying God icons as the Cloning Symbol for the entire feature. Since these symbols cover the reels they appear on, there is potential for much better payouts, and you could get up to 243 wins at the same time.

The feature’s potential is further increased by the possibility of retriggering the free spins. Each time this happens, a new God is added to the Cloning Symbols, plus there are extra free spins as well. You could even have all Gods active at the same time.

This one feature makes the entire game worth playing. Without it, you would get just a lot of smaller wins, and a mechanic that doesn’t amount to much in terms of potential. The base game isn’t all that interesting here. 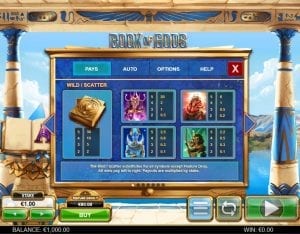 It’s not the theme or design that should be interesting to you in a Big Time Gaming slot machine. It’s true of Book of Gods as well, which has one of the most overused themes ever, related to Ancient Egypt. You don’t get the usual gods though, and the graphics are better than in their other slots, so at least it has that going for it. Overall though, I doubt that its colorful gods, books, and Royals will be of major interest to you.

Book of Gods is one of the highest-volatility games you will find right now, and it’s enjoyed by many because of its huge potential. The Symbol Cloning feature is the one that makes all the difference, but it’s during the free spins that you will be able to make the most out of it.