Coming from a developer with Australian roots, Aristocrat, the fact that Big Red is inspired by that country seems natural. Developers generally love having the chance to promote their own country, and in Big Red we see one of the things that Australia is well-known for, its deserts and the creatures that are living there, with the Kangaroo in the main role.

Designed in the form of a game whose graphics are heavy on the color red in its various shades, Big Red ends up being rather simple layout wise, as it offers only 5 active lines for 5 reels. The same simple side we see in its interface, which is closer to that of a classic slot cabinet. While its best wins promise us rewards of up to 1,250x per line, the feature list includes a Wild Kangaroo, Tree scatters and free spins. The figures so far might not give you reason to be optimistic, but the 97.03% RTP should do that.

One of the unusual things about Big Red is the betting system itself, one which gives you 5 different buttons for you to use when selecting 1 to 5 active lines for the next round. You also have a button that you have to mash repeatedly if you want to increase the number of coins, these being available up to 100 per line. The credit/coin value on the other hand will be fixed at $0.01. All this adds up to a betting range of $0.01 to $5.

While in the base game the player has a win of up to 1,250x, during free spins the amount doubles, and so each line can pay $2,500 there.

I don’t expect to you to be all that excited about the rewards you’re getting, but the RTP that’s been announced by Aristocrat for Big Red is a good one, and at 97.03% it does better than many of the modern releases that it’s competing with.

A fairly regular mix of features can be found in Big Red. The game delivers its wilds, free spins, multipliers and scatters, all these being available in a lot of other games. Providing a unique game experience is clearly not a major goal for it.

Crocodile and Boar icons, while not used as feature triggers, will be able to give you small rewards even with 1-symbol combinations, provided that they appear starting from the leftmost spot on a line. Two other high-paying symbols will pay with 2 or more positions occupied on a line.

Big Red, the Kangaroo that’s getting the wild’s role, is available to be used only as a substitute. It’s got a major role to play in the game though, as each time a combination is formed with a wild in it, the free spins feature will be activated. It’s not a role that is usually given to the wild, but as a result we’re getting fewer wilds on the reels, since the feature is quite powerful.

As mentioned above, you get the free spins active when the Kangaroo is used as a wild in a combination. Each combo that it contributes to will give you 5 free spins.

Tree scatters will appear during the free spins, and each symbol of this type pays the amount that the triggering combination offered. Once again, it’s not a typical way for a scatter to pay you, but it’s interesting.

Free spins can be re-triggered, and the way to do it is through the same Kangaroo Wilds acting as substitutes. An additional 5 free spins would be placed on top of the current number.

These are symbols that appear anywhere in view. During free spins, each Tree pays differently, as I’ve explained above, but for the base game having them show up in two to five positions gets you paid 2x to 50x the total bet. 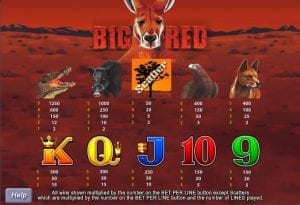 The Big Red title doesn’t just give you the name of the red Kangaroo that’s appearing in the logo and in one of the main symbols. This is also going to be the predominant color in the game, with the red of the desert being also seen in the color of the sky. There are two types of symbols that you see, the lower ones with regular Royals, and then there are also the lone trees, kangaroos, crocodiles, wild boars, eagles and wild dogs.

If you really care about a game’s graphics, then Big Red might feel only average to you, but otherwise that shouldn’t stop you from playing it and trying to take advantage of what it has to offer.

It’s a game that offers few lines and a look that appears dated at first, but once you get to its features things start to become interesting. This Australian desert themed game still has a lot to offer, and its 97.03% RTP is one of the reasons why you should play it.