Buffalo Spirit is taking us to the prairie, and as the night sets in to create the right atmosphere for the game’s players, the reels get populated with images of the creatures which live there. WMS is the developer that has released this slot machine, whose main character is the buffalo.

30 fixed paylines are placed on the 5 reels of Buffalo Spirit. The game appears to have a maximum potential of $90,000 for a single round. Its major features will include the wild symbol, the Replicating Wilds feature and a bonus icon which can result in the activation of free spins.

The bottom row, the one which so often hosts the betting options in slot machines, is going to be used for the same purpose here. It will tell you that the game has 30 lines in use, without giving you a way to modify that number, and then it will offer the Bet/Line option to change as needed. The given line bet range is $0.01 to $3. This allows for the total bet to start at $0.30 and to reach a maximum value of $90. 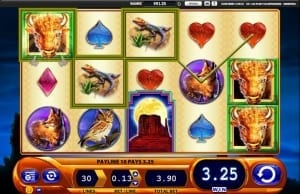 While the game doesn’t make use of ultra high paying combinations, and in fact it only offers 500x ($1,500) for its best five symbols on a line, it ends up paying relatively well in the long run. The highest potential for a single round is $90,000, during the free spins where the wins are doubled.

As for the figure that tells us how profitable the game is for players in general, it’s the RTP which is set to 95.97%. It’s high enough to allow it to compete with other modern releases, so this is one area where we have nothing to complain about.

While Buffalo Spirit doesn’t have unique features, one can’t say that it’s a boring or common slot machine either. There are several features which can be enjoyable inside.

There are two types of wild symbols in the game, both using the image of the Buffalo. One is more square and it’s the wild which you get on the 1st, 2nd, 4th and 5th reels. The other is a thinner buffalo face, and it’s got a red border around it. You’re going to see this second symbol only on reel 3.

Having the Buffalo (the 3rd reel wild) appear and contribute to a winning combination will give you access to the Replicating Wilds feature. Once the initial pay is made, the Buffalo is going to replace some of the symbols on the reels, and then there will be a second wave of pays made. There will be only one wave of such replacements in this feature.

Featuring an image of the Full Moon and a large rock out in the prairie, the feature symbol is going to show up on all reels, as a scatter. At least three need to be visible, for you to get access to 10, 20 or 40 free spins, depending on the exact number of symbols.

While the free spins are ongoing, the wins are all doubled. You can retrigger free spins, via the same 3+ feature symbols which triggered them. The game mentions that an alternate set of reels is used for the free spins, so it’s not clear whether you get better chances in this feature or in the base game. It also says that the 1st and 2nd reels get additional adjacent positions which are mystery symbols, getting transformed into a random symbol at the start of the spin. 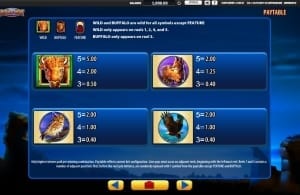 Buffalo Spirit is taking us to the prairie, the home of the mighty buffalo. These wild creatures are majestic and a pleasure to find on the reels, particularly as they get roles as wild symbols, but they are accompanied by smaller critters as well. From coyotes, to owls, cactus plants or flowers of the prairie, there are several that look like they belong in that landscape. Of course, some unrelated symbols have appeared as well, and here I will mention the four card suits. A decent looking game overall, though not particularly modern.

Expect Buffalo Spirit to offer several good features and a Return to Player that is within the expected range for a modern slot machine.