The North American prairie and the wild animals that inhabit it have long been a source of inspiration for developers, and for good reason. As the Wild West was the basis for many books and movies, it made the prairie well-known even to people that don’t live in that part of the world. Once again, we have a slot machine that has that sort of theme, using the Buffalo only for its main character, but otherwise relying on several creatures from the region. Aristocrat designed here a game with an unusual Xtra Reel Power system, which they also included in several other slots.

5×4 reels can offer you anywhere between 4 and 1024 ways to win, depending on the bet you’re using. It’s a unique way of approaching the ways to win system, and Aristocrat includes it in several games of theirs. The downside is that you don’t get a big payout per line, only 300x the line bet from each one, but on the upside there are a lot of ways to form combinations through. An improvement in this area is possible during free spins.

The Xtra Reel Power system requires a few words to describe the way it works. It gives you the option to use 1, 5, 10, 20 or 40 coins in your bets, and then gives you a number of active symbols on the reels based on that. If you want all 1024 ways to win and to form combinations with all 20 symbols, then you need to wager 40 coins, the equivalent of having 40 lines with bets on them. Otherwise, the game starts deactivating symbols from the last four reels. The minimum bet, of 1 coin, gets you the 4 symbols from reels 1 and the 3rd symbol from the next four reels, so only 4 ways to win are active then.
The bet per reel will change as well, and that’s the amount that is used together with each combination’s multiplier, to get you the prize. The value for it is $0.01 to $1.25. 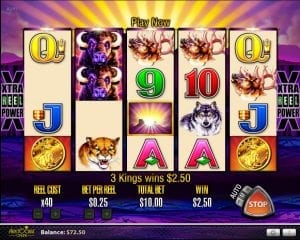 While it’s not the sort of game that delivers a huge jackpot from a single combination, it does offer a lot of chances for you to get wins from it, thanks to all those ways to win. That way, the 300x top rewards it offers don’t seem as bad. They can be transformed into 8,100x wins during the free spins, where certain multipliers can assist you.

Despite all the prizes and features that are available in Buffalo, it’s not the sort of game to have a big RTP, the figure being quoted at 94.85%.

The part that changes the way the game is played, and gives you something unique, would be the Xtra Reel Power feature, which I’ve explained above. It changes the number of fully active reels, and in the process how many ways to win are available as well. Otherwise, as you’re about to find out, most of the game’s features are fairly regular.

One other symbol to watch out is the Buffalo, not only for its top payouts, but also because it appears stacked and so it has the potential of getting you more wins at the same time.

With the image of a Sunset, where the Sun is seen between two mountains, you are looking at the wild feature of Buffalo. With the scatter’s exception, these will be usable as replacements for any other type of symbol. Their limitation is that they may only appear on reels 2, 3 or 4.

Via a Gold Coin scatter symbol, which may appear in any position in the game, Buffalo will give you some cash prizes (up to 20x the bet), but also the free spins that always seem to be the ultimate target in slots. Based on the number of Gold Coins visible, you can receive 8, 15 or 20 free spins.

Wild symbols have random 2x-3x multipliers to apply during the free spins, and they multiply each other, allowing for wins to be increased by up to 27x during your luckiest rounds. 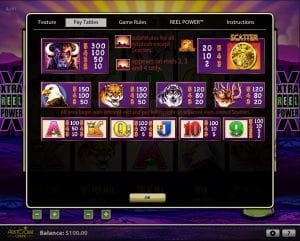 The North American prairie and its creatures, with the Buffalo in the main role, is what you’re getting for the game’s theme. Eagles, Wild Cats, Wolves and Elks are in the main symbols, while features are represented through Sunsets and Gold Coins. The less appealing choices come via the ever present playing cards/Royals.

Buffalo has an exciting side to it, coming via up to 27x multipliers that become possible during the free spins, but mostly what you’re getting is a game with dated graphics and fairly average features, while the RTP is below today’s average.