Featuring dated graphics and a classic theme for the most part, Cash Spin isn’t the most impressive slot machine to look at, but you can count on it for decent features at the very least, and the rewards aren’t too bad either.

Despite the look of the game, it’s fairly modern once you get to its mechanics and features. It offers 243 ways to win over 5×3 reels, it has wilds, scatters, bonus games and free spins with multipliers, so there is plenty going on inside. Reward wise, you might get a bonus game to pay you up to $24,000, or you might get several winning combinations, each one delivering up to $12,000, for an even bigger total jackpot.

There are 40 credits in use, in every single round that you go through as you play Cash Spin. It’s the credit value that is controlled by the player, and for it the range is going to be $0.01 to $12. That’s a big enough range to make possible total bets as small as $0.40, or as high as $480.

Keep in mind, you don’t actually get 40 lines here, but 243 different ones, covering every single possible combination that can be formed in the given game area.

Depending on the part of the game that you’re looking at, you could get winning combinations with Diamonds that pay up to $6,000 (base game), $12,000 (free spins) or you could trigger bonus features which deliver jackpots of up to 50x the bet, so $24,000. With the possibility of having several wins forming at the same time, getting payouts even higher than $24,000 should be entirely possible.

As for the maximum limit that’s been set by the developer, Bally mentions in the paytable that any combination of wins from a single game can’t exceed $250,000.

While the rewards of 500x to 1,000x from winning combinations might not look that bad for a slot which has ways to win, the 94.2% RTP is one thing that is disappointing about it. A respectable RTP would have to start from 96% and go upwards, and this game doesn’t even come close.

A total of three feature symbols are going to be in view on the reels. One is the Wild Logo, the second one is the Money Bag scatter, and for the third we have the U-Spin Wheel.

With only two reels out of five hosting wild symbols, the role of this particular feature isn’t a major one in Cash Spin. On the plus side, they find it easier to participate in combinations when they do appear, as it’s sufficient for them to be on the right reel, they don’t need to be part of a particular active line. The ways to win system has its advantages.

Scatter symbols of this particular type will be appearing on the first, third and fifth reels as you’re playing, and once they do this on all possible reels in a single round, they trigger a bonus game. You have a single spin on the wheel of fortune, and it will give you a cash payout or access to free spins.

There is only one way for you to gain access to the free spins, and that’s through the U-Spin Wheel. If you get it, there will be 12 free spins triggered and a 2x multiplier to double the value of all pays. Additional free spins can be won, though you can’t have more than 60 rounds total.

The third feature symbol of Cash Spin, the Money Bag scatter, will be available on the middle three columns. Getting all three symbols on just as many reels, triggers its own bonus game. You are shown three Money Bags then, out of which you select one. You win a prize worth anywhere between 3x and 50x the stake, which would be one of the bigger rewards that this slot can deliver. 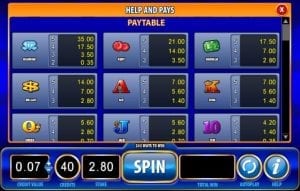 Take a look at Cash Spin, and I’m going to wager that you’re going to have flashbacks of games from the 90s. The graphics are far from appealing, though with gemstones, playing cards and logos taking over most of the positions, there isn’t much to screw up either. It’s a very boring game to play if you’re into high-end graphics.

Cash Spin has some potential as a slot machine with advanced features and ways to win, but then you take a look at its design and you find out about the 94.2% RTP, and suddenly you find that you have better things to do.