As you travel in this fantasy world, you get the help of the Cash Wizard and you’re trying to win a prize that Bally is putting up for grabs. With its gemstone themed graphics, I feel like Bally missed the mark here, but let’s see what else the game has to offer.

Cash Wizard will feature 30 lines for 5 reels and as you play it the game promises to give away as much as $120,000 (15,000x). There are wild symbols at times, while in other cases you might get free spins, scatters or various other bonus icons and features (Mystery Wheel, Wizard Bonus, Wizard Wild, Magic Potions).

The two major components of the bet in Cash Wizard will consist of the amount you use to activate the 30 lines plus the Wizard Bonus Bet, which adds another 20 coins to the total. The bets always have 50 coins in them, but you still get the option to select the value for the individual coins. As such, you can spend the minimum amount of $0.50 if you want to, but the option to go up to $400 is also there, in which case a line bet could reach $8.

Looking at the maximum payout that can be awarded, it’s the Mystery Wheel feature that promises to deliver the most, as much as 10,000x the line bet. This can mean $80,000 cash. As for the next best thing, a single combo of five wilds will pay 5,000x, so up to $40,000, and there is always the chance that multiple wins will come in a single round. Even better, get that wild combo during the free spins, for a tripled payout of $120,000.

While the rewards sound good, and they can give you the motivation you might need to play Cash Wizard, I can’t say the same about the RTP of 93.99% which Bally has announced for this game. It’s below average, by quite a bit, and for an online slot it doesn’t look good at all.

As average looking as the game might be in other areas, it does quite well feature wise, so that’s one part that I’d definitely recommend you explore. As I mentioned above, there is an extra bet that is placed for these features, a fixed one, so about 40% of the wager you use is dedicated to the various bonuses that you trigger. This tends to take away from the usefulness of the feature.

A useful feature symbol, the wild is used in the formation of all types of regular combinations, since it can act as a replacement for another symbol when landing in the appropriate position. By itself, it forms combinations that pay even up to $40,000. Don’t expect to be using wilds as replacements for any of the feature symbols though.

This feature may start at random, while the reels are still spinning at the start of a round. You will see the wizard appear, awarding 2 to 5 extra wilds.

Another random feature, Mystery Wheel can be activated only for rounds where there are no other bonuses triggered. There will be a single spin of the Wheel, which will stop when you click on the wizard. You could get 5 to 20 free spins at this point, or a reward between 100 and 10,000 coins.

Another feature that you could get via scatters, this time using Potion symbols on the first three columns. It’s a picking feature, with up to 7 potions to choose from those available, to get prizes from each one. Finding the Cursed Potion ends the feature early. As much as 760 coins can be won through this feature.

There is another feature symbol that can deliver a feature, the Invisible Ink icon which appears anywhere on reel 3. You just click on the icon, to find a prize of up to 20x the bet underneath. 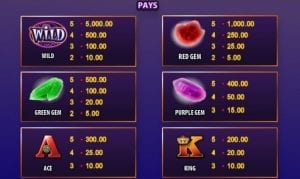 The idea of the Cash Wizard has merit, and if designed properly it could’ve been a great game to play. It’s a dated design though, one which shows you a stick figure in a corner as the wizard, and otherwise it just delivers logos, gemstones and Royals. Hardly an interesting mix of symbols, and the way they were created doesn’t help them either.

It’s a game that will deliver a lot of different features, but you do pay extra for them, and the Return to Player is at a measly 93.99%. Overall, it’s a game that I’d recommend for those going to a land-based casino, but not for an online player that gets easy access to many different options.