One of the older examples of Ancient Egypt themed slot machines, IGT’s Cleopatra was popular enough that it warranted a second game being released in this series. We’re looking at the original slot machine here though, still available at online casinos, to see what has made it such a popular choice among players.

For its layout, the game relies on a very common set, with 5×3 reels & 20 paylines. The game can pay incredibly well, even up to 10,000x through its best winning combinations, but it’s also attractive thanks to its free spins, with tripled wins, scatters or the wilds which will double payouts. We can see already why the game has proven itself over the years.

Betting wise, you’re going to play on up to 20 active lines, and the game will let you select a value for each one between $0.01 and $10. That’s a bet of up to $200 to be made each round, a value that’s high enough to satisfy most players that would want to try it out. 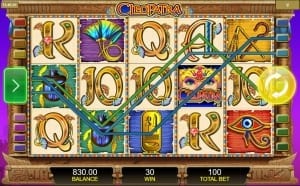 This is where Cleopatra truly shines. Even its base game combinations will pay up to 10,000x, without any other features to get involved. Unfortunately, multipliers don’t apply to the jackpot, but even so, you can go home with a win of $100,000 paid out by a single combination.

95.02% is the announced RTP for Cleopatra, a figure that’s slightly below the average modern slot, but which could be considered good for a land-based machine.

Don’t go looking for anything innovative in Cleopatra, the game will rely on the same features that you will find in countless other slot machines, but thanks to several multipliers your wins could get exciting quickly here.

The symbols which have the Cleopatra logo, along with her eyes, will be the wilds of the game. They’re substitutes which apply 2x multipliers to new winning combinations which they help form, and as is usually the case, they don’t do anything for the game’s scatters. They also pay directly, which is the ideal situation actually, since a 10,000 coins reward can be yours that way.

As for the game’s free spins, these are triggered via Pharaoh icons, scattered ones which are needed in a minimum of three locations in a single round. You get 15 free spins when that happens, along with a 3x multiplier which applies to most wins (not to the jackpot, unfortunately). As wilds also apply 2x multipliers, regular combinations can be improved by as much as 6x during the free games.

The feature can be retriggered several times, but you can’t have more than 180 free spins at a time.

Before the free spins begin, the game also pays out a prize of 2x to 100x total stake, in exchange for 2 to 5 scattered Pharaohs. 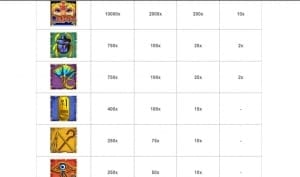 Cleopatra’s theme is based on the story of Cleopatra, the beautiful Egyptian queen that even Caesar was in love with. The game has Cleopatra’s eyes in a major symbol, a pharaoh in another, along with flowers, scarabs, gold ingots, tools or the Eye of Ra. I’m not crazy about the look of the game’s symbols, but I have to admit that even the Royals are getting a design that fits the Egyptian theme.

Overall though, expect an older design, so it’s clearly a dated slot machine in this one particular area.

I think that Cleopatra can still be an attractive choice, for players that aren’t necessarily looking for the most modern graphics around. The features are clearly impressive, even as the multipliers don’t apply to the top jackpot.