Cool Jewels, developed by WMS, is a slot machine that’s quite unusual for this developer, in that it offers a different experience compared with many of the other titles you will see from them. The jewel style of game, with clusters of symbols and big play areas is relatively popular, and WMS seems to have wanted their own piece of the pie.

The game is going to be played on 6×6 reels, and it will involve the formation of clusters of 4+ symbols. Each symbol in the cluster can pay as much as $200, though it depends on how the game evolves. You still get all the usual features from other slots, like the wilds, scatters or free spins, but there are some unique areas as well.

The game will ask that you select the total bet for each round, and the values that you can work with start at the $0.50 mark and can go as high as $200. You keep increasing the bet multiplier, until you reach the value you want to use. It will then be used as a basis for the rewards that you’re paid. 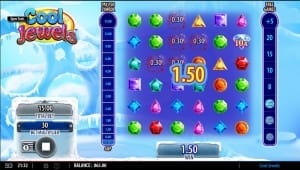 The game pays as much as $200 (the stake value) for each symbol that is part of its winning clusters. You do need to get a lucky streak in order to get paid that much per symbol, but the game makes this possible. It’s more the type of slot machine which will pay often and in smaller amounts, rather than give you a single huge jackpot.

The low volatility of the game will get you paid often enough that overall it ends up paying back 96.1% to its players. It’s the RTP of the game, and it’s a decent figure for any modern slot machine.

This is no regular slot machine, but I’m sure you will figure that out quickly. For starters, the way to create winning combinations in it is going to be through clusters of matching symbols, at least four needed in a group to get you paid. For each symbol in the cluster, you get a certain amount, depending on the wager of the round. As much as $200 could be paid in each case.

This is also the sort of game where winning combinations get removed and allow a new set of symbols to land in the resulting empty spots. You then create a new wave of wins, and the feature can keep going like this for a while.

With each new wave of wins, the symbols that create the next combinations will increase in value. The meter from the left side tells you how much each winning symbol will pay, based on how many symbols you destroyed so far.

There will be several wild symbols appearing inside, and they will be used on the middle four reels. They need to be part of winning combinations in order to be activated. Then, they will destroy symbols in a certain pattern.

Unstable Wild: it will destroy the remaining symbols which are found next to it.

Shattering Wild: destroys symbols found on the horizontal and vertical lines that it is in the middle of.

Shocking Wild: destroys the symbols found on diagonal lines, starting from its position.

As you can get several types of wild symbols at the same time, some positions on the reels can be influenced by several features at the same time. This gets them in a special situation, where they are turned into colored watermark spaces, which end up getting destroyed as well.

Landing two matching wilds will result in the formation of Persisting Wilds. These stay on the screen until they reach the bottom as a result of winning combinations being formed, at which point they disappear.

The Bonus symbol needs to be destroyed a minimum of four times, in order for the free games to start. 4 to 7 such symbols destroyed will get you 8 to 20 free spins. Each bonus symbol destroyed after that will add another 5 free spins. 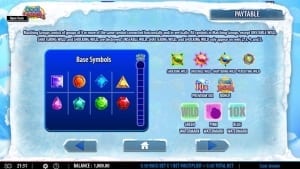 It’s the typical jewel-style theme which is so often used for cluster-style gameplay, and it’s going to show you exactly that on the reels. The symbols deliver multiple gemstones, of different cuts and colors, along with several feature symbols that show logos and various colorful stars. It’s a fun enough game to play, though there are no claims of uniqueness from its designers. There are plenty of games right now which sport a similar look.

If you’re into the cluster pays system, and you want something complex and with a good RTP, then Cool Jewels can be that slot machine.