Day of the Dead by IGT – Slot Machine Review

There are many ways for people to celebrate both life and death, but Mexicans have a particular way of doing it in the case of the latter. Their Day of the Dead has been a fascinating topic for developers, which have turned it into a slot machine in several cases. IGT did it as well, and the slot’s title is as suggestive as it gets of what you can expect to find inside.

Don’t expect the usual slot machine in Day of the Dead. IGT does its own thing once again, and for 5 reels which have 3-4-5-4-3 symbols it uses a total of 720 ways to win. Each of those 720 ways can bring you a win of up to 1,000 coins, so your rewards can quickly add up. Otherwise, major features of the game will include scatters or wilds, along with free spins.

Luckily, though the slot uses 720 ways to win, there is no requirement for you to use a coin for each one. You get a fixed 50 coins wager, for which you can change the individual coin value, or line bet if you will. You start from the basic $0.01, and can reach a maximum value of $10 per line. This gets you a full range for your bets between $0.50 and $500.

Day of the Dead Jackpot

You can get multiple winning combinations formed in a single round, and it’s as easy as getting more than one winning symbol on one of the participating reels. The best individual rewards reach 1,000 coins, so that means up to $10,000 cash per way to win.

The game sounds very good so far, but RTP wise it’s not going to reach the same heights that you will get to in other slot machines with similar designs. It’s going to vary from 92.52% to 94.91%, which at its highest is OK(ish), but not great.

The game’s way of getting its players paid is through a system called MultiWay Xtra. It involves ways to win, but more than that, it also allows combinations to form both ways (starting from right, as well as from the left).

Available to you in the game, but only on three out of five reels (2, 3 and 4), the wild symbols will be only available as replacements which can take the place of one of the regular symbols (not the scatter though). The ways to win system makes them quite useful even with the limits imposed to them, since it’s enough for a wild to be on the right reel, to be able to contribute to all winning combinations which are formed.

Scatter symbols, appropriately marked and present on all five reels, will get you paid when they appear enough times. You need 3, 4 or 5, to get a reward of 2x, 10x or 50x the stake. That’s it for the role of the regular scatter, there are no features being activated through it.

A second type of feature/scatter symbol is the one called Bonus, which has the skull next to it. This time, you need the symbol on all five reels, to trigger 8 free spins. You can get more than one Bonus icon per reel, so you can form multiple wins at the same time. As many as 88 free spins can be triggered at the same time.

The symbol can also be used during free games, to re-trigger the feature. You can have at most 240 free spins played, so there is a limit to how many re-triggers you can get. Expect a different experience from the free spins as well, as they use a different set of reels. 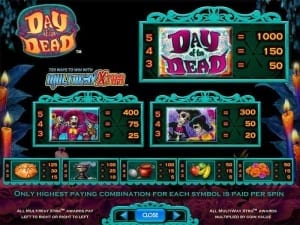 This Day of the Dead theme has been often covered by developers in similar ways, with cartoon-style graphics which involve plenty of skulls and undead. The feeling of celebration is there, with the skeletons being all dressed up and ready to dance, while some of the other symbols show drinks, pies, flowers and fruits. Overall, it’s a good looking game, better than the average IGT release in fact. It’s worthy of note the fact that there are no unrelated icons inside, only ones that contribute something to the story.

Expect to get some decent rewards from Day of the Dead, and the MultiWay Xtra system can be fun to take advantage of as well. On the other hand, IGT slots usually don’t have the best RTP around, and this game is no different.