Fire Opals is part of a genre that’s been incredibly popular over the years, inspired by fantasy and in this case relying on images of erupting volcanoes, beautiful women, flowers and precious gemstones to make the action attractive. It succeeds for the most part, and it doesn’t hurt that IGT also used some interesting features as well in it.

As a slot machine which has the MultiWay Xtra system, Fire Opals will have 5 reels of varying sizes (3, 4, 5, 4, 3 symbols) and with a total of 720 ways to win which pay both ways. It sounds like a pretty good deal already, but wait, there’s more. As you’re going after top wins of 2,000x, you get scatter symbols which pay well, wild symbols to be replacements and free spins.

The single best five symbols that you can land in a single round will come in the form of Scatter symbols, paying as much as 100x the stake when they are on all five reels. That’s up to 5,000 coins which you can get immediately. An alternative, and a way to get paid even more, is to form multiple winning combinations with the Fire Opals logo, each one paying up to 2,000 coins. Since the slot has 720 ways to win, you can quickly get to a relatively big reward this way.

With most IGT games that I’ve tried, the part that seems to disappoint is the RTP. The developer gives us a range within which they expect their long-term results to be, and for Fire Opals it’s from 92.99% to 94.92%. The better games released right now are at 96% or higher, so I’m not excited about the offer we get in this case.

While I wouldn’t get overly excited about the features present in Fire Opals, I would still be happy to trigger them and take advantage of what they have to offer. About the only slightly unique thing about them is the MultiWay Xtra system though, which has ways to win paying both ways, a definite plus for the game.

A wild symbol will appear anywhere on the reel, and will be used in the formation of a new combination which is formed, whether a matching icon is present on that reel or not. If the combination already exists, then the wild will add to it and to the number of ways to win which pay. In Fire Opals, these symbols are only present on the middle three reels.

One other feature symbol, but one that’s only tasked with triggering rewards, not features, will be the Scatter Logo. Having it appear on 3, 4 or 5 reels will get you a reward as high as 100x the bet.

A special Fire Opal icon is a trigger for the free spins, whenever it shows up five times on the reels. You get 10 free spins at the start, but land Blue Opals after that, to get an extra 10 rounds. A maximum of 260 free spins may be offered in a single feature, after up to 25 re-triggers. The reels and wins are changed for the free spins, and instead of 2,000 coins, you now get up to 1,000 coins from each win. 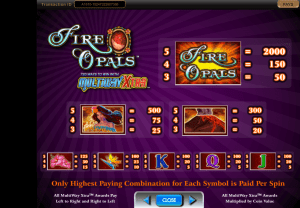 The fantasy genre is well represented at online casinos, and this slot machine adds just one more title to the mix. The Fire Girl is your main character, though a simple logo is preferred to trigger the jackpot. Images of smoking volcanoes, various flowers, gems, but also several Royals, these are the symbols that will appear on the reels. It’s going to be a decent looking game overall.

If you enjoy a good fantasy themed slot machine, Fire Opals has plenty of arguments going for it, such as the MultiWay Xtra system with its 720 ways to win paying both ways.