Fire Queen is the type of game that stands out, a slot machine from WMS which looks unusual as soon as the reels load up. Unique setup aside, it’s a game with a fantasy theme, where fire plays a major role in its design and story.

For a very unusual setup, with 5 reels, you will find that there are two different sets of 2×2 reels to start with, and a set of 3×6 reels for the second part, used together with both initial game areas. The slot will deliver 100 paylines in that game area. It will also use wild symbols, scatters and free spins.

Interestingly enough, even though there will be 100 active lines each round, you only have to use 50 coins. The bet you select will be used for 2 lines at a time, and the amount you go through varies between $0.01 and $2. This gives you a total betting range of $0.50 to $100. 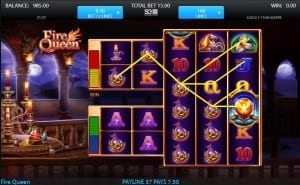 The best combinations you form pay only $800, and with enough reels helping out the potential for one round appears to be reaching $80,000. Individual wins of up to $10,000 (100x the bet) may come via scatters as well.

It’s an unusual game, but it’s not going to pay any worse or better than most slots you’re getting access to right now. The announced RTP for it is 95.95%, a perfectly acceptable figure these days.

As I mentioned already, the game has a very unusual system. You get two sets of 2×2 reels each first, and then there are 3×6 reels which are used in combination with the initial sets to form combos of up to 5 symbols. The first two sets of reels are considered to have 8 individual reels grouped up in them, while the last three columns give you only 3 reels. A total of 11 reels are apparently provided in this game area.

The Fire Queen herself is going to be your wild feature in this case. The symbols which are showing us this beautiful woman are useful in a couple of ways. You can get up to five Fire Queens on an individual active line, and you get paid at that point for the winning combo that results from this. The alternative is to have one or more Fire Queen next to regular symbols, in a way that will allow for a new win to be formed, with the Queen as a substitute. Just don’t expect the Fire Queen wilds to act as scatter symbol replacements.

Reaching this stage of the game will require that you get either scatter symbols or regular symbols in certain configurations. For example, triggering 5 free spins is possible when you get the scattered Orbs on the reels 9, 10 and 11 (the only ones which get them). You can get the same 5 free spins by having reels 1-4 or 5-8 filled with regular matching symbols.

For a higher number of free spins, 20 instead of 5, you need to get both the three scatters on the last three reels and four matching regulars on one of the two sets of 2×2 reels. This also gets you a payout of 100x total stake. 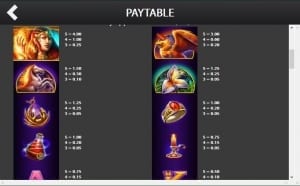 The game’s design is an unusual one, thanks to the way it was constructed. The unusual layout is not exactly a plus for the slot, but it doesn’t detract from its look as much as the Royal icons do. These are quite basic and without any relation to the slot’s theme. The related symbols will show the Fire Queen, a Fire Orb, the Phoenix Bird, a horse with a fire mane, an orchid and a pendant. While I enjoyed the themed symbols, there are elements inside which take away from the whole experience.

Fire Queen is no standard slot machine, and even while it’s giving you a different type of experience, it manages to also have a good RTP, of 95.95%.f