The 1984 Ghostbusters got the mother company close to $300 million at the box office, so it was a huge success for those times. There are still a lot of fans of the film today, more than three decades since its release, so this branded IGT slot machine should see a lot of players want to try it out, even before we start talking about its features or potential payouts.

If you choose to answer the “Who Ya Gonna Call?” question with Ghostbusters, you will get a game with 5×3 reels and 30 active lines to play on. You get appropriate graphics with images from the movie, but also four different types of mystery features, two types of wild symbols, a Ballroom Busters Bonus and the Stay Puft Free Spins. There is a lot going on inside, so it’s no surprise that the base game payouts only reach 500x the line bet per winning combo.

From each winning combination that you form, you may get as much as 500x back, so up to $5,000. In addition to the possibility of having several wins at the same time, there are also mystery features with up to 5x multipliers, or payouts of up to 1,000 coins, which can do even better for you.

The Return to the Player is not very high, lower than an online slot’s average in fact, being announced by IGT between 92.50% and 94.50%. To be a good slot machine in this area, it would have to be at 96% or more.

There is a wealth of features in Ghostbusters, which help make the game exciting to play. Some will come at random, others via symbols, but they all contribute in making the slot fun.

Two different types of wild symbols may appear in the game. One has the image of the Green Ghost, the other is showing us an Old Woman. Both are marked with the red Wild logo, so they’re easy to spot. The usual way of taking advantage of these symbols is to have them appear alongside regulars, so that they can form combinations together. Sometimes though, three to five matching wilds can appear on a line and pay you directly, even up to 500 coins.

As long as you didn’t just have a bonus feature triggered, any round can end up giving you one of the slot’s four mystery features. It could be a random 2x to 5x multiplier applied to the wins of the round, it could be a cash prize of up to 1,000 coins, 1 to 3 wild reels or 1 to 4 additional wilds placed in the game.

Three Ghost icons will trigger this one. You need two White Ghosts and one Green Ghost. Once you get inside this feature, you need to use 5 Proton Shots, in order to uncover some of the six ghosts which are hiding behind various objects. Once you’ve fired all your Proton Shots, the feature will end. Each win you get can be multiplied by 2x to 5x.

Changing completely the symbols that you use, the feature will consist of 8 free spins which use 40 lines, rather than the base game’s 30. Following each round, you may have Marshmallow Wilds appear on one or more positions. They are locked in next, and they stay to help out until the feature is over. There is a chance that the Win Meter will open and take in one of the marshmallows, in which case you get a win of 50x to 1,000x. 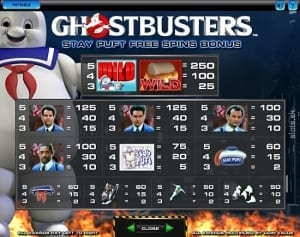 The 1984 has been instrumental in the design process of the modern slot machine. The majority of the symbols you’re going to see inside will revolve around the members of the Ghostbusters team, along with the ghosts they’re fighting and the various specialized tools they were seen using. The 80s style graphics are unavoidable, but the fans of the movie will appreciate that about it. It’s not the sort of game where you would mind that the design is a bit on the retro side.

I think that Ghostbusters will prove itself popular with the movie’s fans, and there are a lot of them. Pro slot machine players will avoid it, once they see what kind of RTP it has.