It’s not the kind of slot machine that will deal with a human’s ideal destination, but a gold fish aquarium can offer an enjoyable experience just as easily as an ocean themed slot machine, and you will see in this slot why that is. The creator of Gold Fish is WMS, or Williams Interactive.

For Gold Fish’s design the creator chose 5 reels of standard size (3 symbols per column), and they had 25 lines placed on them. Wins as high as $30,000 per winning combo (10,000x) are advertised, making the game quite easy to like. Of course, it doesn’t hurt that it also has wild symbols, scatters, a Gold Fish feature and a Fish Food picking bonus.

Whatever the size of the bet that you decide to use, it’s going to have 25 lines covered at all times. In addition to the 25 coins reserved for the active lines, the game also has a feature bet which is obligatory, and that one adds an extra 10 coins to the wager. You end up with wagers which have 35 coins in them each round, but you vary the bet per line as you need to, from $0.01 to $3. The full betting range is going to be $0.35 to $105. 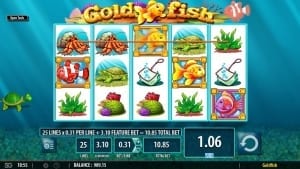 Look out for that Gold Fish, he’s the star of the show and as a symbol it will form combinations which pay as much as 10,000x the line bet, or up to $30,000. It’s not a bad prize at all, and the game’s potential can be quite high if you start adding up all the lines on which this symbol could create wins at the same time.

The game even gets a decent RTP from WMS, which apparently wanted to give it every chance to succeed in this crowded market. At 96%, the game will pay a decent amount back to its players, that figure being the expected return for modern slot machines.

Gold Fish’s very own mix of special features will give you something to do, so you don’t have to just spin the reels each round.

These are the ones that tend to be most obvious, as they appear often enough on the reels. Taking the form of the Gold Fish, they can be part of combinations with small rewards as a substitute, or they can appear multiple times on the same line, to pay directly the top jackpot. Naturally, as wild symbols, you shouldn’t expect them to be substitutes for the slot’s scatters.

One of the game’s symbols will feature the image of a Fish Food can, and that’s the scatter that you get to work with. As usual, it’s going to be useless if you get it only once or twice in view, but with a minimum of three you start getting paid and you trigger the Fish Food picking bonus as well. The direct rewards will reach $7,500.

As for the bonus game, it’s a picking feature where you have to match three identical Fish Foods, in order to get the corresponding reward. With four matching choices, you double the amount. Should you find three cans of Turtle Food, then you get to pick one of three turtles. This can give you a prize of up to 10x the bet. Should you find all cans of regular fish food, then you pick one of the golden turtles instead, and those pay up to 50x the bet.

A feature that will be activated at random, after any spin, it will show you a Gold Fish, as it’s jumping into a fishbowl. You get a pick next, of a bubble, to find how many of the 5 to 20 free spins you will trigger. Multipliers of up to 10x are also available, though they don’t apply to the top jackpot combo.

Another random feature, it will use a Purple Fish to trigger it. This fish blows 3 bubbles, with numbers from 0 to 9, which will be arranged into a number. A cash prize between 15x and 984x the line bet will be paid.

It’s another picking feature, where you choose either the bubble with the chest, the clam or the castle. Fish come and kiss the award, increasing its value each time. The best ones are the kisses from the Purple Fish, which give you up to 200x the line bet.

You have to make a choice, of a bubble, to get a reward. Up to 500x can be won through your picks.

The final random feature which you can get inside, it will award superscatter spins to you. The symbols appearing during those rounds are all scatters, so they can form combinations by being present anywhere in view three or more times. You get 1 to 3 superscatter spins in this feature. 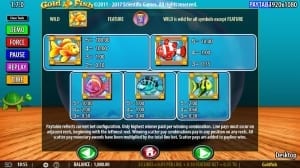 It’s a cartoon-style design which gives us a look at what’s going on inside an aquarium. You get several types of popular tropical fish, a crab, cans of fish food, turtles and images of aquarium plants and even some cleaning equipment. The look is a cute one, definitely worthy of a movie for kids or for a book. You see animations of these fish moving around in the background image, through the aquarium.

I think you will appreciate Gold Fish, thanks to its wealth of features, its high RTP and its cute graphics. WMS did a decent job with this one.