The beautiful Aphrodite, and the Ancient Greek world that has brought her to us, are the subject of this new slot machine that’s available from IGT. A major developer, especially in the land-based market, IGT has what it takes to create a great game, so let’s see how they did with Golden Goddess.

The regular 5 reels of any modern slot machine can be found in Golden Goddess as well. There will be 40 paylines in place, and they will allow the player to try his luck at landing prizes of up to 1,000x. You may also expect to find inside wild symbols, scatters, free spins or stacked mystery icons, so for the most part it’s going to be a predictable experience.

You get to decide on the value of your wagers, and for the 40 lines that are used you may have as many as 50 coins for each one. You pick the value of the coins which are selected as well, and through them you can have a bet as small as $0.40, or as high as $2,000. It’s going to give everyone a chance to participate, whether they’re high rollers or penny slot players. 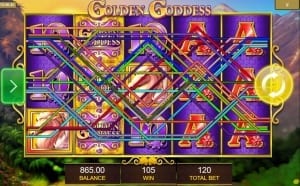 The game’s going to deliver wins of 1,000x at most, which might not seem like a lot initially, but consider that the game does include those mystery stacked symbols which can turn big areas on the reels into matching icons. You may get multiple wins at the same time through this Super Stacks feature.

The long-term potential of Golden Goddess is calculated somewhere between 93.50% and 96% by IGT. The developer has given us an average game in this one area, as the best games will start from the point where IGT stops. It’s close, but not quite at the level of a great game.

Looking at the big features included in Golden Goddess, I haven’t found anything that would be considered innovative. It’s a solid title, which has some of the most common features around, as well as one rarer option, but that’s it.

You will sometimes notice logos of Golden Goddess appear on the reels. These will be the game’s substitutes, which by appearing in the right spots can contribute to the formation of new wins. Expect for their own wins to pay the most in this slot, and with 2 to 5 which are arranged left to right you can win 10x to 1,000x. Naturally, don’t expect for a wild to be a replacement for a scatter icon.

One of the defining features for this game is called Super Stacks. The reels will contain stacked mystery symbols, which are transformed into a random icon each round. Those positions will become wild symbols, high or low paying ones, or even scatters (only on reels 2, 3 and 4).

You’re not going to get the free spins in quite the usual way. You will need Red Rose scatters on all positions of the middle three reels. You get some help with that from the stacked mystery icons. 7 free spins are triggered when this happens.

You will pick one of the Red Roses next, to reveal one of the four high paying icons. The revealed symbol will appear in the mystery stacked positions each round. The downside is that you can’t get high paying wilds in those mystery positions, so the free spins actually end up having a lower maximum potential than the base game. The most you can win is 2,000x the line bet in the free spins, compared with 40,000x in the base game. 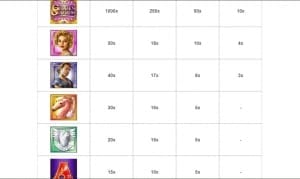 Even as the game’s Royals work hard at making me a liar, I’d say that the overall graphics of Golden Goddess are good. They’re better than in the usual IGT release actually, which is already an improvement. You get several high symbols which will show Aphrodite, a male character, along with white doves or Pegasus, but there are Royals as a part of the game’s look as well.

Golden Goddess manages to deliver better than average graphics, a decent but not great RTP and several interesting features.