Hot Shot is mostly about the hot part, being a fire themed game, using this element in several symbols and in the background graphics. It’s a Bally release, though an older one by the looks of it, something that you’d find in land-based casinos as well.

Now, looking at the reels and at what they can offer, a slot like Hot Shot delivers 5 columns and has 20 active lines for every single round. There are several jackpots delivered in the game, one of which will be worth up to $4,000,000, while regular combinations can pay at most $5,000. You will encounter several types of scatters that can take you to a bonus feature, which has an impressive potential.

It doesn’t matter much what kind of budget you have to work with, Hot Shot is likely to accommodate it. You can set up a bet as small as $0.20 and as high as $400, so you get plenty of options in-between those two extremes. Since 20 active lines are always employed, you are wagering anywhere from $0.01 to $20 for each one.

For the game’s regular wins, those will reach a top value of $5,000. Consider that you get that from just one line, and it’s entirely possible to get several wins in a round, so there is considerable potential during the base game as well.

Despite all those big payouts that the game mentions, the game has a 94.03% RTP, which is below the average at an online casino. Even so, if you’re dreaming of a game with a life-changing jackpot, Hot Shot is certainly capable of delivering that.

Feature wise, Hot Shot’s action mostly revolves around the scatter symbols and the way they can take you to one of the jackpots that are mentioned at the top.

To reach this bonus feature, the requirement is to have three scatter symbols appearing either on the centre line or within one position of it. The five types of symbols that will trigger the feature are the Blazing Sevens, the Diamond Line, Double Jackpot, Triple Jackpot and the Blazing Sevens Seven Times Pay. These symbols take the form of mini slot machines, and if there are enough of them visible they will start the feature. Each of the five symbols I mentioned above are reserved for a certain reel, and the more of them you have in the combo, the closer you get to the high paying symbol, the one appearing on reel 5.

Each of the matching scatters will start spinning its mini reels and they will pay based on the symbols that appear on the 1 line that each one offers. This feature may deliver the big jackpots of the game, even the $4,000,000 one. 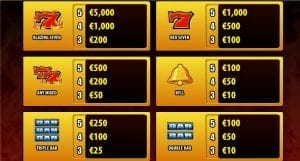 I didn’t find much to be excited about in the graphics of Hot Shot. The game offers a theme that’s considered a classic, with a fire element added to many of the symbols and to the background image. Otherwise, the symbols shown in the game are going to have several scatter logos, plus regular or fire 7s, dollar signs, golden bells and various stacked Bar logos. It’s not a modern design either, so the choice of symbols isn’t the only one that will set it back.

Hot Shot will dazzle you with huge potential payouts, being capable of making its players millionaires. It will not do the same via its graphics or the rest of its gameplay though.