A branded version of Jeopardy, the famous TV game show that has been available in this form since the mid-80s, and in its original format since the 60s, has now been transformed into a slot machine as well, by IGT. They launched this slot machine in 2015, and they did it by using even the rights to the images of those working for the show, Alex Trebek included.

The wager might be suggesting something else, but Jeopardy is a slot with 40 active lines in a game area of 5×4 reels. Whether you’re using the Wild Rush feature with its stacked wilds, the Jeopardy Bonus Board with its five different types of features, or if you’re going after a top win of 2,000x, you should be having plenty of fun with Jeopardy, the slot machine.

This is one of those games that will give the player 40 active lines, but will require that 60 be covered, including an obligatory extra bet for the features as well. You get to decide what amount goes to each line, and that will vary between $0.01 and $50. You could spend just $0.60 to spin the reels, but you can get to a maximum bet of $3,000 as well, provided that you can afford it. 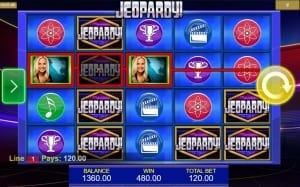 Your regular wins will go as high as 2,000x usually, requiring combinations of up to five symbols with Alex Trebek in them. Not only can you get more than one combo at a time, but the free spins can offer multipliers as well, so your winnings can be improved further this way.

You could get an RTP as high as 96.40% in Jeopardy, though the starting point for the range is at 92.8%, so I guess it’s up to your luck to decide how well you will fare in this game.

I enjoyed the special features which have been introduced in Jeopardy, the slot machine offering us several options that are not typical for most games.

Represented by images of the Jeopardy Logo, the wild symbol may contribute to the formation of new combinations. It does nothing about a scattered Bonus though, it works its magic only on the regulars.

The appearance of Jeopardy Logos on the reels will make it likely that the position immediately below them will be transformed into an extra wild Jeopardy Logo. It basically gives you a chance at a stacked wild symbol.

The Bonus Logo, when appearing on the middle reel, will trigger a Jeopardy Board Bonus feature. If you happen to get more such symbols, then you will get better rewards from your picks. You will have a Jeopardy board with three picks to start with, but you can get extra ones via Daily Double options.

Just Spin Baby: this will give you free spins and will have two Daily Doubles as well.

X Marks the Spot: gives you a multiplier, to be used during free spins.

Potpourri: extra free spins or an increase in multiplier, plus it has two Daily Doubles as well.

Wild About You: gives you certain symbols as extra wilds on the last four reels of the free spins.

Really Wild: gives you a wild reel during the free games. 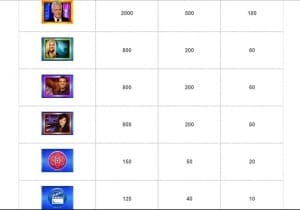 The theme for the game is Jeopardy, a TV game show with more than half a century of history behind it, winner of almost two dozen Emmy Awards, along with various other accolades. It’s still got a lot of fans, and for more than thirty years it’s been hosted by Alex Trebek. You see this presenter, along with other well-known participants in running this show, as some of the major symbols of this branded slot machine. Other positions, less important ones, will get things like musical notes, globes or trophies, all turned into simple icons. It’s not a bad looking game, which is worth noting particularly since it’s using so many photos of real people.

You don’t need to be a fan of Jeopardy, in order to enjoy this game and the cool features it provides you with.