KISS Shout It Out Loud by WMS – Slot Machine Review

The rock music genre has gotten plenty of attention over the years from slot machine developers, and KISS is one of those releases which celebrate this type of music. It’s a branded release, which is obvious if you know about the famous KISS rock band, and it’s offered by one of the major creators of land-based and online titles, WMS (Williams Interactive).

A player that has tried WMS slots in the past probably knows the type of layout that KISS is using, one which involves two sets of reels, of different sizes. One has 5×4 reels, the other is called the Colossal Reel Set and it offers 5×12 symbols. In total, there are 100 lines in play here, and wins of up to 500x your bet is possible if you get them all involved. For the other features of this slot, expect to find wild symbols, scatters or bonus free spins.

The betting range of WMS will cover 100 active lines, but the actual number of coins which will be used in the bet is going to be set to 50, so each one will cover 2 lines. The coin value is the one that you’re most likely to play with when you change the wager value. It’s going to start at just $0.01, but it can reach a maximum of $5, so that you have a range of $0.50 to $250 per spin. 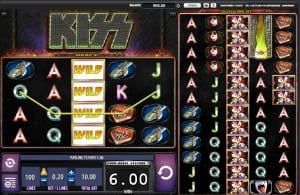 With so many lines available, KISS is definitely not a high volatility title. That much you can guess based on the low maximum potential as well, as the game will pay at best only 500x the stake in a single round. You’d need to cover both sets of reels with wilds in order to get that much. The actual value of the highest prize is $125,000.

Don’t be too sad about that low maximum potential though, we know from WMS that the game is going to be as profitable as any other new slot machine, the RTP being quoted at 95.94% in the paytable.

There will be some rarer features inside, but there are plenty which I’d consider common as well.

One of the unusual things to note about this game is the use of the two sets of reels, something that WMS has done several times in the past. You get one at 5×4 reels and the other at 5×12. Obviously, there will be more active lines on the colossal set than on the regular one, but there are also some elements which will be used in common.

It should also be noted that the high paying positions are stacked symbols, and so these can be used in the formation of winning combinations, multiple times in a single round.

The regular-sized symbol with the entire KISS band together is going to be your wild feature. It’s usable in this role when it’s combined with any symbols, to create new winning combos on active lines. Otherwise, it’s not going to do anything about the scatters.

To reach this stage of the game’s bonus features, you will need the KISS logo scatter to appear. This symbol is used on the reels 1, 3 and 5, and it’s available both on the main reel set and on the colossal one. This is one of the few moments where the game combines elements from both reel sets, as you need 3+ scatters combined from both game areas, to trigger the free spins. 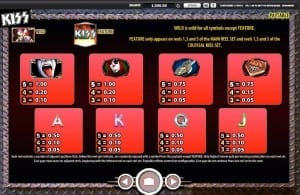 As you may know, the source of inspiration for this WMS slot machine is the KISS rock band, which was formed in the early 70s and is one of the most recognizable bands in the world. One of the easiest to recognize thanks to their black and white face make-up, the band has a lot of great songs and many fans all over the world, so the decision to create a slot machine based on them is a logical one. The developer even negotiated the use of several of their songs in the slot’s soundtrack, so as a fan you will love hearing songs like Detroit Rock City, Rock and Roll All Nite or Shout it Out Loud.

The better paying positions of the game will revolve around the members of the rock band, and you have them either stacked or regular-sized on the reels. Others show off guitars or guitar picks, logos, but there are Royals inside as well. It’s going to be a decent looking slot machine for most, but it’s not as good as the titles released by NetEnt in their NetEnt Rocks series.

KISS is a must-play slot machine for the fans of the band, as it looks good, has a high RTP, offers a great soundtrack and its features are acceptable. You can play KISS slots for real money at any online casino with WMS games.