The glitter might have its small role in the design of this IGT slot machine, but for the most part it’s going to be the cats that will be in the main roles here. Kitty Glitter is all about its four different types of cats, using them for high symbols.

This is going to be a slot with 30 pay lines that are used on 5×3 reels. You win up to 1,000x from each one, while for the game’s big features IGT has included a wild symbol, a scatter and free spins which have a bit of an extra kick.

IGT usually makes it easy for a player to find a bet value that they’re comfortable using in the long run, and Kitty Glitter is no different. You have 30 lines which need to be covered, and so your smallest bet can’t be below $0.30. On the other hand, the $0.01 per line is just the minimum value, and the highest one could reach $100. That would get you to a maximum wager per spin of $3,000, which is excellent if you happen to be a high roller. 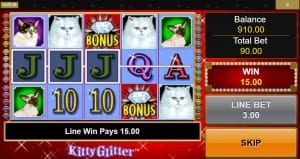 Kitty Glitter will make itself attractive, but the best winning combinations it offers will not contribute as much to that. The game only pays 1,000x the line bet, though it should be noted that the second best paying combo is at only 75% of the top one, so the difference isn’t as big as in other slots.

If you’re curious about the payback percentage, the game’s theoretical return, we found that the developer announced it within a range of 93.51% to 94.92% which is below the online industry’s average, though it would be fine for the land-based one.

You’re going to encounter several features inside, and some even offer something extra, so they don’t get boring quickly.

Check out the last four reels of the game, to find the Kitty Glitter Logos, the wild symbols in this slot. You may use them as substitutes for any of the Cat or Royal symbols, so both high and low icons are replaceable with wilds. On the other hand, these icons don’t reward you directly and don’t act as replacements for scatters.

The second feature icon of the game, the Bonus Diamond, is only used on the middle three columns. Get it to appear on all three reels simultaneously, and the slot gives you 15 free spins along with a reward of 3x the stake.

The bottom of the screen will have the four cats present underneath the reels, along with three diamond-shaped empty positions next to each one. Each Diamond symbol that you get during the free spins will be collected next to these cats, and once three are obtained you get a Wild version of that particular cat. Only the last four reels will get these types of wilds.

To re-trigger free spins, you need 3 more Bonus Diamonds in random positions. You get another 15 free spins thanks to them. 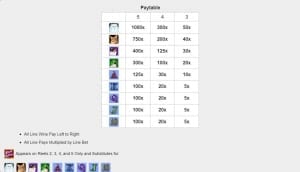 The cat theme of Kitty Glitter will be an appealing choice for players, as felines tend to have a lot of fans worldwide. There are only four types of cats present as symbols here, but they cover the spectrum of cat breeds quite well. Other symbols visible inside will be mostly the Royals, with Diamonds and game logos as feature triggers.

I’m not going to praise the graphics of Kitty Glitter, as even though the theme is well-chosen, the design is not. It’s a slightly dated look, which is enjoyable mostly to fans of the theme.

Kitty Glitter doesn’t give you great graphics or a high RTP, but at least it’s got some exciting features for you to explore.