The regular Robin Hood themed slot machines are already fairly popular, so seeing a Lady Robin Hood title released should give players an even better reason to give it a go. Theme aside, this Bally slot machine has both pros and cons, and we’re going to let you know what those are.

First of all, you have 5 reels in Lady Robin Hood, with a total of 40 active lines usable each round. Rewards of up to $1,000 will come via its best winning combinations, but the game will also have wilds, scatters and free spins, features that will improve the game’s profitability.

Like many of the other Bally slots, this one also prefers using fixed lines, so the result is that there are always 40 coins in your wagers. The denomination varies though, and as it’s going from $0.01 to $10, it allows the total bet to vary between $0.40 and $400. The range is big enough to let all types of players give Lady Robin Hood a chance, from those looking to have some fun, to high rollers.

Lady Robin Hood doesn’t have the most exciting prizes, the best combo offering only $1,000 (100x). On the other hand, there are certain features which can bring you locked wild reels, so during the free spins the slot can become quite interesting, and it’s possible to get even $40,000 from a single round at that point.

In the end, we’re interested in seeing a game that will pay a lot of money back to the player, and these days that would require an RTP of 96% or better, to put it in line with its better competitors. Unfortunately, Lady Robin Hood’s return is at only 94%, so there are a lot of other games out there which do a better job.

A mix of common and unique features have been implemented in the game, so this side of Lady Robin Hood should be interesting enough.

On reels 2 to 5, symbols with the Wild logo may appear as you play. If at least one is present on an active line, which has matching regular symbols on it, together they may form a new combination. The substitute’s role is the only one given to the wild, as there aren’t enough of them to create wins directly.

The slot can also have double symbols, Wilds with arrows between them, when the bonus icons land on top of existing wilds. The hybrid symbol works both as a scatter and as a wild then.

It’s a random feature, which you can get during paid spins. It involves 2-8 wilds which are added on the last four reels, at random.

Having LRH logo symbols appear on the reels, as scatters and in three positions, will trigger for you the free spins. You get 10 free spins and 2x the bet to start with. There is no possibility to re-trigger the free spins, once you’re inside.

You start off with 3 Arrows as the feature begins. There are shields on top of the last four reels. For each shield there are four positions which are waiting to be filled, so that a locked Wild Reel can be triggered in that column. Each arrow that you collect will fill one position in a shield, getting you closer to turning the reel into a locked wild. In some rare cases, a single arrow can fill all positions of a shield.

The free spins and their locked wild reels make it possible, in theory at least, to have four wild reels and a total of 40 winning combinations of 5 symbols each. Needless to say, it could be immensely profitable. 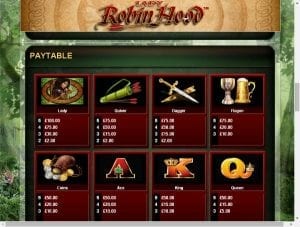 One of the things that Bally got right in this game is definitely the design, along with the chosen theme. The idea of a Lady Robin Hood is interesting already, and Bally used cartoon-style images to make it fun to look at. It’s a medieval style design, which has the lady with her bow in a symbol, while in others we see steins of beer, coin purses, quivers filled with arrows and daggers. What’s less interesting is the Royals that we see in low paying icons.

If it wasn’t for that below average RTP, I’d recommend Lady Robin Hood for its interesting theme, graphics and even the high potential free spins. You could still play it if you’re willing to take the risk of the lower RTP.