A slightly older game from IGT, Lucky Larry’s Lobstermania has been a fairly interesting slot machine, and one that’s been popular enough to warrant a sequel. We’re going to take a look at the first slot of the series though, the one that started it all.

Expect for 25 lines to be available at most, though the 5×3 reels can host fewer lines as well if you want to. You have cartoon style graphics, and along with wild symbols, scatters, bonus games and up to 10,000x payouts, the slot manages to make a good impression.

A lot of the newer IGT slots don’t give you this option, but Lobstermania allows for the number of lines to be reduced, even though you start off with all 25 active. You may change the total bet in another way, through the bet per line, which starts at $0.01 and may reach a top value of $4. Should you use all 25 lines, as it’s recommended, you have bets of $0.25 to $100 that you can use.

An impressive 10,000 coins could be yours, if you manage to have a line covered by Lobster symbols. These are wilds, but they also pay up to $40,000 when they appear and occupy an entire line. An ideal situation would have them landing on multiple lines at the same time even, to bring even higher payouts.

Despite the fact that it’s been ported from the land-based version, Lobstermania has a 94.99% RTP, close enough to the standard 96% which is considered acceptable by most players right now. It’s an older game, so this is even more surprising.

It’s an old game, but definitely not a classic, and you will see this in the features which have been implemented.

By far, my favorite symbol in Lobstermania, not only because it’s the substitute and the top jackpot trigger, but also because it has the image of a lobster wearing sunglasses. The wild will replace almost all symbols, the exceptions being two feature triggers (bonus and scatter). When they end up in 2 to 5 positions on the same line, and from the left, they form a combo which pays 5x to 10,000x, depending on the exact number of wilds.

Showing us the lobster inside a trap, the Scatter symbol might not be as cute to look at, but it’s used to deliver some incredible rewards. Up to 200x total stake can be paid out if you have up to five symbols of this type on the reels. It’s a reward of up to $20,000.

The only bonus game available here is this one, the Buoy Bonus which triggers via images of Lobster Fisherman icons. These are bonus symbols, so you need them to appear three times on an active line, they’re not scatters. The Lobster icons are turned into Pick Me Lobster icons, and you select one to find if you got 2, 3 or 4 picks in the feature.

The bonus screen will have buoys for you to pick from. Each choice adds 2 or more items to the trap. Lucky Larry takes out these items and each one can pay 5 to 250 coins. The best possible outcome in the game is to have 4 buoys and if you get the most out of them you could win up to 4,000 coins. 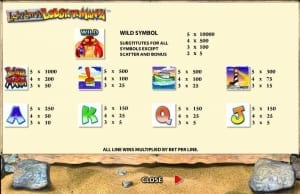 The lobster fishing theme would normally be slightly cruel, especially since the main character is a lobster dressed as a fisherman. IGT manages to make it look funny though, thanks to the cartoon graphics which they’ve used. Besides several icons with lobsters or lobster traps, as well as Lucky Larry, there are images of logos, buoys, fishing boats and a lighthouse. The graphics are dated, yet good enough to be played even now.

Lucky Larry’s Lobstermania is still an interesting game these days, even after so much time since it’s been first released. It’s got a sequel as well, if you want to see how it evolved, but the first game should offer plenty in terms of payouts and entertainment.