In the case of Mayan Riches, expect to find a game from IGT which deals with an ancient civilization from South America, the sort of topic that developers tend to prefer in slot machines. They’ve done reasonably well design wise, but as is often the case with IGT’s slots, there is some room for improvement.

In Mayan Riches, the 5×4 reels which are going to spin each round get a total of 40 active lines. That should give you plenty of chances to hit the 1,000x top prize, on at least one line. Do expect various other features to come in handy, with wild symbols, scatters or free spins all being mentioned. 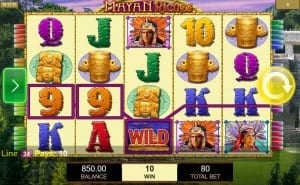 Based on the kind of top reward that the game mentions, of 1,000x, your wins will return as much as $50,000 to you, provided that you’re a high roller. Leaving aside the chances of having several top paying combinations at the same time, which would put the game’s potential at a much higher value, I’m not impressed with the top rewards of Mayan Riches.

The RTP is another area where the slot disappoints, the range for it being announced between 92.50% and 94.98%. It wouldn’t have been great even if it was fixed at the highest value of the two.

There are a couple of features inside, and I’d expect them to be appreciated by players, but there is nothing earth shattering there.

For starters, expect for Mayan Pyramids to appear on the reels and to contribute to both new and existing winning combinations. They may provide you with a symbol that is needed to create a new win, or they can appear in the 5th position of a line, to improve considerably an existing combo. You can’t have a Pyramid as a replacement for a Bonus symbol, but otherwise there are no major limitations.

Since it can create its own winning combinations, getting 3 to 5 Pyramids on a line, left to right, will bring you a reward of up to 1,000x, the game’s highest.

The centre three reels will get the Bonus scatters, symbols which are usable as triggers for 5 free spins. A small reward, just 2x the stake, will also be paid out at the beginning. You may re-trigger the feature, with another 5 free spins, but there are no extra features to be found inside. There is also an upper limit on the number of free spins you can get, but it’s set at 255, so it’s not a very likely target. 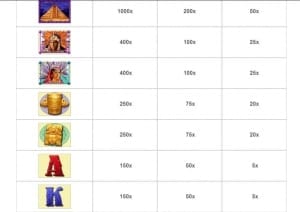 The Mayan civilization, one of several which used to exist in South America, has been the focus of several slot machines over the years, all of them relying on this idea that their temples are still hidden by the jungle, and that there are treasures to be found there. You get a couple of gold idols as major symbols here as well, but for the most part the icons get male or female Mayans, their pyramids and various Royals. I didn’t find the graphics to be impressive, especially since I know what some competitors are offering, but it’s not a bad looking slot.

Mayan Riches has average graphics, below average RTP and slightly boring features, so overall I haven’t found a lot of reasons for you to play it in the long run.