Miss Kitty, as a game that’s available both to players that visit land casinos and to the ones enjoying Aristocrat’s slots from the comfort of their own homes, is fairly popular and known by many. The cat theme is one of the appealing qualities of this slot machine, but it’s not the only thing that gets players to come and try it out.

You will be playing Miss Kitty through wagers placed on its 50 lines, and the 5 reels hosting them will offer 4 symbols each. Whether you manage to trigger the $10,000 top jackpot, or if you get major features like its free spins, scatters or stacked wilds, I’m certain that you will get plenty of enjoyment out of it.

Betting in this case starts from a minimum value of $0.01 and it can potentially reach a value of up to $2 per line. Given the 50 fixed lines that you can use each round, you are allowed to spend anywhere from $0.50 to $100 per spin. 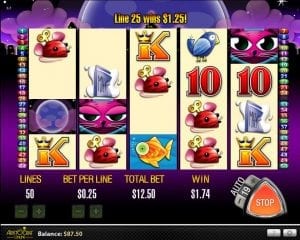 Now, if you look at the payouts that are delivered via Miss Kitty, I doubt you have many reasons to be impressed with the offer. The regular combinations, the very best ones offered by the game, will pay 100x the line bet and that will mean up to $200 cash for you. The free spins do make it easier to fill up a screen with wilds, and that could be very helpful, but it’s still not a payout that will go beyond $10,000. The game mentions that its maximum payout is $100,000, but I assume that’s taking into account multiple rounds from the free spins as well.

RTP wise, the game is average, and with those rewards in play I’m surprised that it even manages that much. The figure that’s been quoted for Miss Kitty is 94.94%.

It’s not quite the usual way that features are implemented in slot machines, but it’s not too far from that either. The wilds and scatters dominate this side of the game, and the resulting free spins have the best potential of getting you paid well.

Miss Kitty is only shown in one symbol, and that’s the wild feature. While you shouldn’t expect to see this symbol all that often, it’s going to be useful when it pops up on any of the four reels on which it can do that (columns 2 to 5). These wilds can’t get you paid directly and they don’t act as replacements for a Full Moon scatter.

A Full Moon scatter symbol, appearing on each of the first three reels, will end up triggering for you a round with 10 free spins, plus a small 3x reward.

Should any Miss Kitty icons appear on the reels for the free spins, they remain locked in the landing positions and they keep acting as substitutes until you run out of spins. Should any scattered Full Moon icons appear beneath Miss Kitty symbols, then they will contribute to a prize.

You may retrigger the free spins once, with an extra 5 rounds added to the total. A maximum of 15 free spins can be played overall, whenever you trigger this feature. 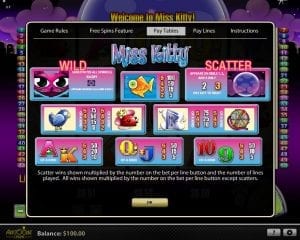 Sporting a cartoonish design, Miss Kitty adds to the reels mostly images of things that cats would play with or enjoy in some way. The pink cat that is in the main role is seen in one feature symbol, while the Full Moon is part of another. The relevant symbols also include goldfish, birds, toy mice, milk cartons and balls of string. The ones that pay less and are not themed get Royals. It’s a design that falls in the usual range for a slot from Aristocrat, so it’s playable but not impressive by any means.

Featuring rather small rewards, but offering locked wilds for the free spins to make up for them, Miss Kitty is a game with an average design and Return to Player (94.94%).