Miss Red is one of IGT’s slot machines, and a very special game at the same time, since it’s part of a small series of theirs which follows fairy-tales that have girls in the main roles. We’re looking at the slot machine that’s based on Red Riding Hood here, but there is another one which has Snow White for inspiration (Miss White).

This is a game which uses the MultiWay Xtra system, adding 1024 ways to win to 5×4 reels, while combinations may form anywhere on three or more consecutive reels. You will discover that the game has for its features expanding symbols, wilds, scatters and free spins, so there should be enough inside to make things interesting. Payout wise, the game offers up to 150x for its best regular combinations.

Setting up the bet will involve 45 coins in Miss Red, which will be enough to activate 1024 ways to win. The game gives us coins which are worth between $0.01 and $20, which allows for the betting range to vary from $0.45 to $900. It’s a decent betting system, but IGT always seems to take into account high rollers as well, not just players with smaller budgets. 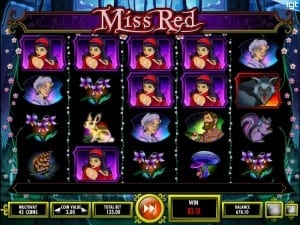 Thanks to the 1024 ways to win which are involved in Miss Red, there is potential for some decent rewards in the game, but only if you manage to fill up a lot of positions with matching symbols. Otherwise, individual prizes will reach 150x the line bet, which doesn’t mean all that much for a slot machine.

As for the RTP, the announcement from IGT is that it will vary between 92% and 96.16%, which is a fairly big range. If it’s at its highest, then it’s a good game, but at its lowest it’s not worth playing. Chances are that it’s going to be somewhere in the middle ultimately.

Ranging from the MultiwayXtra system, to wilds or free spins, the features of Miss Red appear to be fairly well designed.

This system, which is going to implement ways to win, is IGT’s version, but there are other developers which have something similar. The difference, which is in IGT’s favor, comes from the fact that not only are you forming combinations with symbols appearing anywhere on consecutive reels, but you do it even if the starting point isn’t on the left side. With MultiWay Xtra, you can have combinations on the three middle reels, or starting from the right, it doesn’t matter.

The two symbols which you will keep finding in the game with this ability will be the ones with Red Riding Hood and the Wolf. Sometimes they appear on their own, but they can be mixed in symbols as well if they meet as they expand. Get two Wolves on a row, to have all symbols between them transformed into extra Wolves. If Red is there, the resulting symbol is with Wolf-Little Red together.

Little Red can expand in the same way, transforming symbols found between two such icons on the same row.

The Wolf-Little Red combo icons are also wilds, so they can act as substitutes, but only for the symbols which were combined (Wolf and Little Red).

Miss Red benefits from the presence of a free spins feature as well, and you can count on it triggering when Granny’s House bonus symbol lands on the middle three reels. The feature is called Granny’s Free Spins. You have to pick a basket first, to get 5 to 15 free spins from them. Extra free spins trigger when another set of Bonus icons appear. The upper limit imposed by the developer is set to 280 free spins.

An extra feature from the free spins will be the End2End Wolf-Little Red expanding symbol. This one can transform symbols into extra wilds, if there are two such icons on the same row. 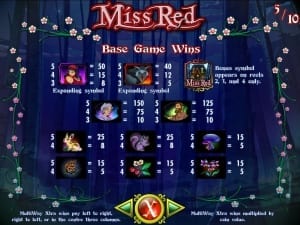 Though you have a story that’s inspired by Red Riding Hood, the game uses an adult version of the girl. it’s an attractive brunette which goes through a forest, to reach her granny’s house, meeting the wolf along the way. There is an image of a hunter as well, while other icons have rabbits, squirrels, toadstools, pine cones, berries and flowers, so it’s an entirely themed design.

Check out Miss Red to find a well-designed slot machine, with a fairy-tale inspiration but with an adult twist to it.