One of the games available via IGT, Miss White is also one of the two slots that the developer created for a mini-series. The other one is Miss Red, with a focus on Red Riding Hood’s story. As for Miss White, her story is inspired by another extremely popular fairy-tale, called Snow White and the Seven Dwarves. As far as fairy-tale inspired games go, this is one of the good ones, but I will let you discover more about it from our review.

Featuring a larger than usual game area, with 5×4 reels, Miss White delivers a Multiway system which incorporates a total of 1024 ways to win. It also has expanding symbols, wilds, the End2End feature, bonus symbols and free spins, so overall there should be more than enough variety to keep your interest up in the long run. Wins of up to 150x are delivered when winning combinations are formed, with matching symbols on consecutive reels.

Even though the game relies on a ways to win system, it doesn’t ask you to wager a coin for every single possibility. Instead, you use a fixed number of coins, 45, to simulate the presence of regular active lines. You decide only on one thing, the value of the coins which are being used. They vary between $0.01 and $50, so the total betting range is $0.45 to $2,250.

You get your chance to win a prize fairly often, but don’t expect anything huge from the game. Its best wins will pay 150x the line bet, or up to $7,500. You do have a lot of ways to win, so there is potential for several combinations paying at a time.

RTP in this game is similar to what you can expect from Miss Red. The games are paying between 92% and 96.16% back to the player, which is only good if you look at the higher figure. Since IGT mentions the lower point of 92%, the actual RTP is probably somewhere in the middle, at a below average 94%.

Among the things to note about this game, I would mention the ways to win system. The developer calls it Multiway Xtra, and it’s definitely not giving you the usual ways to win. It forms its wins with symbols on consecutive reels, which don’t need to touch the left or the right side. A win of 3 symbols is possible on the middle three reels.

This is a feature which involves expanding symbols. It uses two types of icons, with Snow White or the Dwarf. You need two matching symbols on the same row, and at that point all symbols found between them will be transformed into Miss White. The Dwarf is transformed into a mixed Dwarf/Snow White icon.

A Dwarf/White combined symbol is a wild which is a replacement for the Dwarf or Miss White.

The Miss White logo, against a dark castle, is going to be your bonus trigger. Appearing on the reels 2, 3 and 4 only, you need all three to get into their feature. You need to select one of the displayed apples next, to get between 5 and 15 free spins that you start with. More free spins can be triggered via the same 3 Miss White logo scatters. The most that you can get in a single round is 280 free spins, by re-triggering the feature several times. 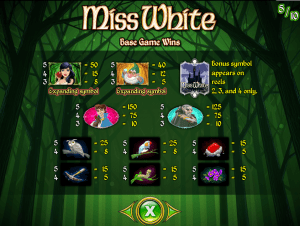 It’s a fairy-tale inspired look, but one which has been very well designed. It’s featuring cartoon-style graphics that were well crafted, with plenty of details and 100% related icons. Miss White is inspired by Snow White, and we have in her a beautiful young woman that’s wearing a white dress. Same as with Miss Red, the main character is sexy and more suited for adults, than children.

The rest of the symbols involved range from the Dwarf, to the Witch, castles, a pickaxe, a gem, owls, flowers, birds and insects.

Miss White is going to be an enjoyable game for anyone that wants a modern fairy-tale with an adult-friendly design and plenty of good features.