In what amounts to a classic Mexican themed game with a focus on chilli peppers, More Chilli will have several other elements inside that will focus more on the country’s culture, so it’s not just spiciness that you get from it. It’s Aristocrat that is offering us this game, one that doesn’t quite match a modern player’s expectations, but which is very good for the land-based market.

In the case of More Chilli, you are given the option to spin 5×3 reels and on them you will get as many as 25 wins from just as many active paylines. You will have wins of up $100,000 to collect from the very best spins that you trigger. When it comes to major features, the ones included in More Chilli have Man Wilds, Money Bag scatters and collectable Chilli Peppers which have extra features triggered during free spins.

Like a number of other popular Aristocrat slot machines, More Chilli will also incorporate a way for you to get some better odds during its features, though you will pay for the privilege. You may have up to 25 lines in use each round, and with the +5 Extra option on you can go up to 30 coins selected each spin.

The other option you have is to select the bet per line, or coin value if you will. That one starts from $0.01 and reaches $2. Depending on the selected options, a bet in More Chilli can drop as low as $0.01, or it can reach $60. 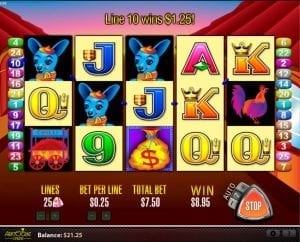 A Mexican Man is going to be your way of triggering the jackpot of More Chilli. The symbols are paying 2,000x for each combination they form, and based on the wagers that are possible inside you can win $4,000 from each one. For a screen filled with the right symbols, you get paid $100,000.

The part that I really like about this game, and which tends to be a disappointment in way too many slots coming from Aristocrat, is the RTP. It manages to be quite close to the average of a modern day slot, being announced at 95.69%.

More Chilli will have a couple of features that end up being interesting, but that’s not something that you will get in the base game.

Available during all spins, whether paid or free, these symbols are the ones showing you a Mexican Man. Whenever these symbols appear and the circumstances are the right ones (right location, right symbols next to it), the wild Man will be a substitute and a new or improved win may come your way thanks to it. If it happens that up to five Man Wilds are occupying a single line, then you win the 2,000x jackpot of More Chilli.

Everyone loves free stuff, and so it’s no wonder that the free games are such popular features in slot machines. Of course, developers also add more features to them, making them more profitable than the paid spins, so they’re more rewarding as well. In the case of More Chilli, the feature triggers through three or more Money Bag scatter symbols, which you need to have in any position in the game, but in the same round. You can apparently get this one at random as well, at the end of a spin, which is unusual but welcomed.

If you had the +5 Extra active, then instead of the usual 12 free spins, you get 15. The free spins get played with two sets of reels, and they’re available on both. For the duration of these spins, you collect Chilli Pepper symbols in a special meter. You unlock the 3rd set of reels at 9 collected Chilli and you get 5th reel symbols to be all wilds, while the 4th set and 4th and 5th wild reels you get with 14 Chilli icons. With 30 collected symbols, the four sets of reels get wilds on all positions from the last three columns. 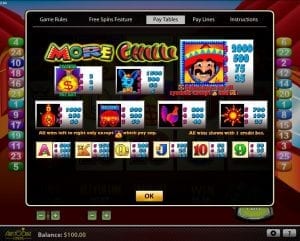 The design would nicely fit the look of a slot machine that’s got at least a decade since it was released. It’s not a new game, and it’s been created for the land casinos initially, so it wasn’t that great to begin with. Compare it with the slot machines that are only available online, from dedicated developers, and it doesn’t stand a chance.

Theme wise, it’s getting the Mexico/chilli theme, another very popular topic. The symbols get to show off a Mexican Man, a bag of money, chilli peppers, a chihuahua, a bottle of spicy sauce, a chilli cart, a rooster and the Sun. Six unappealing Royals are last on the paytable.

More Chilli gives you little to be excited about graphics wise, but look beyond that, to features and its RTP, and you might just be inclined to give it a try.