Natural Powers is a super-hero themed game, but it’s not using any of the regular existing brands for inspiration. Instead, it relies on a cast of four girl super-heroes, which appear to be inspired by nature’s elements. Ice, fire, wind and earth are all represented in these four heroes. The game is an IGT release, so it’s got a huge name behind it.

The game has 40 active lines, which are spread out over a game area of 5×4 reels. There are some very good wins to be had from the game’s combinations, up to 40,000 coins paid out for a single one, but the game will also make use of multipliers, free spins, wilds, scatters and FreeFall symbols to get you that much.

You have 60 coins in use, for the 40 active lines of the game. You get the coin value as your only bet option, but you can modify it to relatively high values, so it turns into a high roller’s slot if need be. 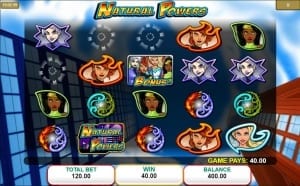 The top payout of the game, for a single combination formed in the base game, is 4,000x. Consider up to 10x multipliers which come via free spins, and you can expect a win of 40,000x out of the best combinations you can form.

The range of the game’s RTP is between 92.61% and 96.47%, which means that it might be above average or it might be below over the entire course of its life. This is likely dependent on the choices that you make as you play it, such as the free spins that you can select.

This is no typical game, not when it comes to features, and it incorporates several interesting ones which we will go into more detail on below.

Whenever a winning combination forms in the game, the symbols involved in it will be removed from the area, allowing a new set of symbols to come in. It’s definitely not a new feature, we’ve seen it in dozens of other slot machines, and it’s very useful. You can end up triggering multiple wins in a single round this way. The cascades stop happening once you get no more wins formed thanks to them.

Expect for Wild Logos to be part of your reels as well. These will be the replacement symbols, which you will be able to use in combination with any regular icons, but which don’t do anything about the Bonus icons.

As each spin ends, and after you’ve gone through any FreeFall action that might occur, there is a chance that you will get a mystery feature, which will be associated with one of the four super-heroes.

Wind: removes the Ice and Fire icons from the slot’s reels.

Fire: it burns the Earth and Wind icons that are present in view.

Earth: snares random symbols arranged in patterns and removes them from the reels.

Ice: removes a random pattern of icons, through freezing.

Though you need three Bonus symbols to gain access to the free spins, there is a possibility that you could get the feature even with two triggering symbols. The Super Team could appear then, to add that third icon through a cascade. The reels on which you can get these bonus icons are the 1st, 3rd and 5th ones.

Next, you get a pick, of a character, and based on that there will be a certain free spins feature triggered. 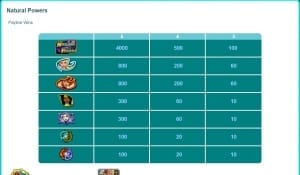 The inspiration for Natural Powers comes from nature’s four elements, but they’ve been turned into powers associated with just as many super-heroes. The four girls that take on this role use fire, wind, ice and earth as a basis for their powers.

The graphics involved are at the same level as those you’d find at other major developers, and the game looks better than most titles that IGT releases, so it’s definitely a step in the right direction.

The symbols shown will have Wild or Bonus logos, images of the four girls, but also of mixed power icons (water and earth, or fire and wind).

Natural Powers not only offers great features, but it also sports much better graphics than in the average IGT release, giving you plenty of good reasons to try it out.