Pixies of the Forest by IGT – Slot Machine Review

One of the more enjoyable games from IGT, visually, is going to be this Pixies of the Forest, a fairly modern release that’s being offered by this developer. The graphics are only part of its appeal though, as you will discover for yourself, and the features can be just as enjoyable. The story being told is a fantasy-inspired one.

There is a lot going on inside, the game offering 99 lines in a standard 5×3 game area. It also has Tumbling Reels, wilds, scatters and free spins, so the action should bring you lots of wins along the way. Payout wise, the best combinations delivered will pay 2,000x per line.

Despite the large number of lines involved, 99, there are only 33 coins used in your bets in Pixies of the Forest. You may vary the wager per line, or the number of coins which are used, meaning that you could get away with a smaller bet, or you could go full high-roller mode.

Pixies of the Forest Jackpot

A top winning combo in Pixies of the Forest will deliver 2,000x the line bet back to you. It’s not a bad reward, particularly given the high number of lines involved, as well as the reduced number of coins which are used to cover them. You don’t get multipliers, but there are Tumbling Reels to improve the potential of the game further.

Despite the mentioned rewards and features, which should make the game a good pick, the RTP is not one to inspire much confidence. The figures quoted by IGT are 93% to 94.90%, and that range is way too low even if you take into consideration only the higher value.

The game offers the sort of special features that I usually find enjoyable, but it doesn’t have anything too unique to give you.

The system involved, with 99 lines, is built at least partially on the ways to win system. Rather than just forming combinations on consecutive reels, it also adds the condition that the symbols connect horizontally or diagonally, so you can’t get paid if the combo isn’t grouped up that way.

An increasingly common feature these days, but an important one nonetheless, the Tumbling Reels will take symbols which are part of winning combinations and will replace them with fresh ones. You can get multiple cascades of symbols and wins this way, even though you pay only for the initial spin.

As you play the game, you will discover at times Wild symbols, featuring logos in them. They’re pretty obvious about what they will do for you, but they’re very important and they can improve the outcome of your spins. The only limitation placed on them is in regards to the Bonus symbol, which they can’t replace. The middle three reels are the only ones that can get wild symbols.

Compared to other games, the free spins don’t trigger the same way, as they require 3 Bonus symbols on one line, rather than scattered around. You have to make a selection next, to reveal how many free spins you got. There will be wilds on the first four reels, for the duration of the free spins. Unfortunately, there is no way for you to re-trigger the free games. 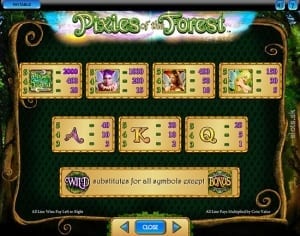 Pixies of the Forest will feature much improved graphics, compared with anything else I’ve seen offered by IGT. The images of the magical pixies give us the more important elements of the design, while in secondary roles you get things like playing cards or logos. Go beyond the reels, to find an enchanted forest, just the place for these pixies to live in.

I’d recommend Pixies of the Forest for their graphics and features, if it wasn’t for the below average RTP range which IGT announces here. You can find better slots out there.