The jungle themed Prowling Panther might not sound to you like a very unique release, but it’s enough to take a look at its layout, to find that it’s not something typical. Coming from IGT, the game has its pros and cons, and you’re going to learn all about them below.

Prowling Panther features a 5-reels game area with 3-4-5-4-3 symbols on them, and with a total of 720 ways to win. Whether you encounter 2x stacked wilds, scatters or free spins, you should have plenty to do, and on top of that you can try for one of the top wins, of up to 500x.

Games with ways to win are always set up to use fewer coins than the number of winning opportunities they have. There are 50 coins in use in this case, activating for you 720 ways to win. You may decide on the value of those coins, but there are always 50 of them used each spin. 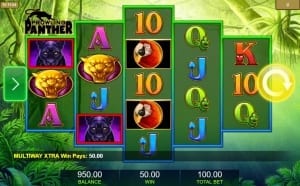 For a game with this many opportunities to win, the rewards are expected to be lower, to make up for that. The big prizes are at 500x the line bet, which is not a huge amount. Consider the game’s 720 ways to win, and you will find that it has a maximum potential of 7,200x total stake.

The figure which tells you how good the game really is, the RTP, is announced as a range by IGT. The lower figure is 92.09%, while the maximum one is 96.09%. If the actual RTP is somewhere in the middle of that range, then you’re not getting a great deal from Prowling Panther.

I’ve found some unusual features in Prowling Panther, even for IGT, while others are found in other games of theirs. Overall, it’s a fairly unique gameplay style.

First of all, we’re getting the system called Multiway Xtra by IGT. The developer uses the ways to win system under this name and forms combinations on consecutive reels, with matching symbols.

This is one of the more unusual features which the game has implemented so far. It involves symbols marked 2X, which are used as wild symbols and at the same time they count as two positions in a winning combo. What this means that even if you had only four symbols in a combination, if one of them is a 2X Wild, then it’s considered a 5 symbol combo. You shouldn’t expect wild symbols to be replacements for the other feature triggers, but they work very well when combined with regular icons.

In order to access the free spins, the game will require that you have Golden Panther scatters on all five reels. You win the equivalent of the bet, plus you get access to 8 free spins for each way to win that’s getting the 5 Panthers. Obviously, you can get multiple Panthers per reel, and so there are multiple ways to win and sets of 8 free spins to trigger. 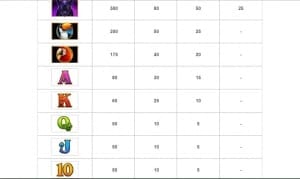 The theme of the game is considered a fairly common one, as it involves creatures of the jungle in its main roles. The title mentions the panther, and indeed that’s the creature which appears in the top paying symbol. A second version of the Panther exists, though made out of gold and acting as a feature trigger. Toucans and parrots are other big symbols, while all the secondary ones end up with images of Royals. The game had bigger potential, but the use of those Royals managed to ruin the overall look.

Prowling Panther doesn’t have a good enough RTP to warrant a second look, even as its features were well chosen.