Among Bally’s slot machines, there will be quite a few with big rewards to give away, but the Quick Hit series has a special place in my heart. As you will discover below, it has big potential, even as it relies on relatively average looking graphics and a theme that’s a bit more common than I’d like. Look out for this game, both at land-based and online gaming establishments, as Bally is catering to both sides.

If you look at Quick Hit Pro, you will find that the game uses 5×4 reels, while 40 fixed paylines are going to be in use each round in that area. Impressive wins, as high as $600,000, can be yours via the Quick Hit symbols. Some of the other big features that were included are the wild symbol, scatters or the Prochinko free spins.

You don’t need to fret much about the wager system of Quick Hit Pro, it’s going to make things relatively easy for you. As the paylines, all 40 of them, are fixed, you just have to decide what the line bet should be worth. Values ranging between $0.01 and $10 in this case, the total bet varies between $0.40 and $400.

The game’s most impressive payout will be coming via the Quick Hit mechanic, involving as many scatter symbols of this type on the reels. The rewards could reach 1,500x the bet, which in this particular game can mean $600,000.

The game’s regular symbols will pay at most 1,000x the line bet, or $10,000, with the possibility of forming several wins in a single round obviously.

Looking at the RTP of Quick Hit Pro, we’re finding it at 94% for the entire life of the machine. It’s typical for a Bally game that is present in land casinos, but as an online title it doesn’t make much of an impression.

For the most part, Quick Hit Pro is not going to be the sort of slot machine that you’re going to play for its features. You do get them, but they’re not particularly unique or impressive.

One of the icons that you will not see very often, but which is likely to make an impression even if it shows up only once, the wild symbol is also the one capable of paying the top prize of $10,000 (1,000x). It’s a simple Wild logo with two blue arrows behind it, and it’s a substitute more often than not, when it does appear.

One of the two scatter symbols that Quick Hit Pro uses, the Free Games logo is obvious about the things it can do for you. Its appearance is possible on the three middle columns and by getting it on all of them you will trigger the Prochinko Free Games.

The feature consists of 15 free spins, without the option to re-trigger them. Pinball icons are added to the game area, and whenever they appear they are collected. Get 1+ Pinballs during the free spins, to trigger a bonus game. It should be noted that the free spins use a different set of reels.

Prochinko Bonus: you pull the plunger, so that the pinballs can be launched. A prize of 1x to 5x the stake will be paid by each pinball, the decision being random. With up to 20 Pinballs collected in the free spins, the absolute highest reward you could expect from this feature is 100x the bet, or $40,000.

The Quick Hit symbol is going to be your favorite in this game, and the one you will be praying to get as often as possible. As few as four such icons will get you paid, but the amount is on the small side at that point. You want to get at 11 or more Quick Hit scatters on the reels, as that will get you the top prize of 1,500x the stake ($600,000 potential). 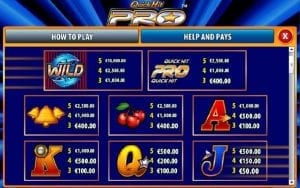 Theme wise, Quick Hit Pro will not be impressing anyone, but then again that’s not what you should be focusing on in this slot. The symbols will feature several logos for wilds, free games or the Quick Hit feature, but once you get to the regulars you will see cherries, bells or Royals. Graphics quality is on the low to average side, there is nothing impressive or modern about them.

If that $600,000 top jackpot interests you, then you’re going to have fun trying your luck for it, but otherwise the game doesn’t offer a high RTP or modern graphics.