Red Mansions, while it is one of many Chinese inspired slot machines, has several unique things to offer. I’d take a look at the characters which appear in the game, as well as some of the game’s features, if I were you. There are other elements as well to consider, both good and bad, so I’ll let you read the review to find out all about this game.

You will find 40 lines and 1024 ways to win inside, which have been implemented on the same 5×4 reels via IGT’s MultiWay Xtra system. They have also used wild symbols, bonus symbols and free spins. Rewards will reach a maximum of 5,000x per winning combo.

The slot allows you to use 40 or 80 coins, and based on the choice you make, there will be just the original 40 lines active, or the 1024 ways to win as well on top. The other way to vary the bet is by changing how much the coin value is worth.

The best way to get paid is via the 40 active lines, since those combinations will pay up to 5,000x. The same combo, in the ways to win system, pays only 500x. There is a big potential there, as you form combinations through both methods.

IGT has announced the Return to Player for Red Mansions, and it’s a range of 92.90% to 95.03%. Even at its highest value, it’s not a figure that would make someone want to play this game, there are way too many slots which pay at 96% or more.

I think that you will appreciate some of the features offered here, along with the gameplay style. The option to get both lines and ways to win together is not unique, IGT has used it in other slots, but I’m always a fan of it. You do pay extra, but the game is made more exciting by the presence of this option, and wins will come more often.

This system adds the ways to win and the combinations being formed here will require matching symbols on three or more consecutive reels, that’s it. They don’t pay as much as the regular paylines, but alongside them they tend to provide you with more wins and excitement.

Look out for the Red Pagoda icon, to find the wild feature of Red Mansions. This symbol is a substitute whenever it lands in the location which allows this. Sometimes it needs to be in a certain position, to contribute to a line, while other times being on the right reel is enough (for ways to win). The wilds are not present on all reels, only the last four ones, so they don’t pay anything directly.

The game will also have Bonus symbols in use, icons which you need appearing at least two times on the 3rd reel, in a single round. Should that happen, you get 10, 15 or 20 free spins, based on the number of Bonus symbols from that column (2, 3 or 4). The free spins can be re-triggered after that, using the same method. 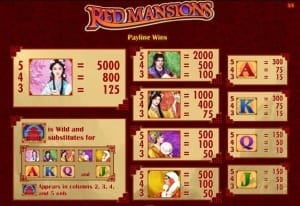 The theme in itself is not that special, we’ve seen our share of Chinese inspired games before. The difference is from the choice of symbols, which relies on images of various characters of Chinese origin. You have men and women, dressed like royalty, plus an image of a red pagoda. The developer also used several Royals, symbols which don’t add anything to the design.

Red Mansions manages to deliver some decent features and graphics, but the RTP is of such a nature that it destroys the game’s chances of getting played by serious players.