Siberian Storm is painting for us an image of a desolate area, one of the world’s least populated, and also a place where Siberian Tigers exist. The focus is on the coldness of the region, but also on tigers that might be living there. It’s a release from IGT, and a fairly important one in their collection. 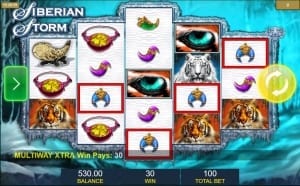 The jackpot of the game, obtained via regular combinations, is 1,000x, or up to $50,000 per combo. Landing five scatters can get you more, but the regular wins have the advantage of being capable of forming several times in a single round, and they have higher potential.

The usual way of announcing the RTP for IGT is to give the players a range within which it falls, rather than a fixed number. In this case, it falls between 92.52% and 96%. It would be alright if it was at its highest figure, but the middle of the range is much more likely to be the true number.

About the only truly special thing about Siberian Storm is going to be the layout and the MultiWay Xtra system. Otherwise, you’re looking at a pretty boring set of features.

The advantage of this system with ways to win is that it will pay for combinations being formed starting from either side, so it’s more profitable than the ways to win you find in most slot machines. A total of 720 ways to win are available in this case.

The symbol in question features an image of a white tiger, along with the Wild logo. It’s only added to the middle three columns and by appearing there it is included in any regular combinations which are formed. Both low and high paying symbols can use it to form new combinations or improve existing ones. Wilds will not be capable of replacing scatter symbols.

There is a symbol in this game, marked SCATTER, whose only role is to get you paid. You will need it appearing 3, 4 or 5 times, and in exchange it will pay 2x, 10x or 50x total stake. That’s all it does, so don’t expect any features from it.

Responsible for the free spins delivery is another symbol, a scatter as well, which shows the image of a Tiger’s Eye. The presence of this symbol is required on all five reels, but the position doesn’t matter. 8 free spins are triggered when this requirement is met. You can form multiple combinations of such symbols in a single round, and in that case there are more free spins triggered. As many as 96 rounds can be obtained in one go.

Once the feature is activated, it may be re-triggered. The maximum number of free spins that you can benefit from is 240.

The Siberian theme brings with it a colder look, one that’s appropriate for that part of the world. You’re going to find ice and snow everywhere around the game area, while the reels are mostly focused on the tiger. There is a regular tiger, a Siberian one, logos, but also jewelry based on the eye of the tiger or on their claws. I’m not crazy about the graphics involved here, they look slightly dated, but that’s usually expected of IGT.

Siberian Storm will give the player good enough features and the popular MultiWay Xtra system, but at the same time it doesn’t have a high enough RTP to make itself a player favorite.