While celebrating some of the most daring traders in our planet’s history, the ones that used to travel on the Silk Road from Asia to Europe, this game is one of Aristocrat’s releases and as such it’s got a cabinet version in the land-based market.

In its case, you get 243 ways to win, so you can have combinations formed just with symbols that are on consecutive reels, nothing else. The layout also uses 5 reels which spin for each round. The thing to really love about this game is the big payout, 12,500 coins being on the line here. It’s also a game with free spins triggered via scatters, or with wild symbols that apply multipliers as high as 15x.

Don’t worry about the 243 ways to win/lines that have room in that game area. You don’t actually pay for all of them, rather for 25 fixed lines which don’t actually exist, so they’re used only to make life easier for you. The wager you select, of $0.02 to $1, is for each of those lines, and the total bet could go up to $25.

The Merchant is your best-paying regular symbol, with a prize of 12,500 coins (2,500x) being the highest amount that you can hope to get from it. You also need to consider the wild multipliers that can boost it further, so 187,500 coins could be won in the best case scenario.

RTP wise, the game is calculated to pay back to players 94.74% of the amount invested in it, so the house edge is 5.26%. It’s a little bit higher than in the usual slot you get to play right now.

In Silk Road’s case, the features are definitely among the things that make the slot worth checking out. The wild in particular is exciting, but I’ll let you discover that by yourself.

A scroll of silk, one of the highly sought after materials of the Middle Ages, is a fitting image for the symbol that acts as the wild. Though rare to the sight, with only the 2nd and 4th reels hosting it, it can have a big impact when you finally get it to appear on the lines. Get one, on reel 2, and there will be a 3x multiplier to triple the prize of any wins formed. Get the reel 4 wild, and the multiplier is set to 5x. Should the best case scenario apply, and you have both wilds forming wins that round, the total multiplier will be 15.

The Golden Moth is your other big feature, the scatter. By having it show up in different positions around the reels, but during the same round, there are 10, 15 or 20 free games triggered. The Moth has rewards to give as well, though it has to appear from left to right on consecutive reels for that to happen.

3 or more Golden Moths can retrigger this feature, and the number of free games that you benefit from can be a lot higher than 20 this way. 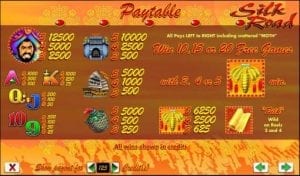 The graphics have never been one of the strong suits for Aristocrat, at least if you play their games online. For land based titles they look pretty good. For Silk Road, the theme in use is related to the traders that used the Silk Road in the Middle Ages. One of those traders is among the symbols that were used, while others give us castles, Chinese sail ships, jugs of wine, moths and the scrolls of silk that were created with their help. Naturally, the list ends with Royals, all six that you usually get in slots.

Silk Road’s high multipliers (3x to 15x) and its unique theme would be excellent reasons to play it if you find it at a land based casino, but I wouldn’t go out of my way to locate it and play it at an online one, there are better options there.