Stories of bravery like that of Spartacus have always been popular, and so it’s not much of a surprise that the Ancient Rome’s gladiators have gotten quite a bit of attention from slot developers over the years. Spartacus has gotten the bulk of the themed slots which have gone this route, and in this case we’re looking at the WMS version for this story. It doesn’t look like a regular slot machine, but that’s usually a good thing, since boredom is easier to combat with unique features. For this exact same type of action, but with a different design, you can also try out the KISS rock-themed slot, as Spartacus appears to be a clone.

Expect to be playing on a setup which includes two sets of reels, one called normal which has 5×4 reels, and the other called colossal, involving 5×12 reels. You get 100 active lines from the two sets, with 20 on the former and 80 lines on the latter. Transferred full reel wilds, scatter symbols and free spins are going to be your big features inside. All the while, this game can pay up to $125,000 per spin, or 500x the stake.

You have 100 active lines in play usually, though the slot allows for the reduction of that number if you feel like it’s necessary, even to just 20 lines. The bets will involve one coin for every two lines, and so you can wager 10 to 50 coins per spin. The setting that you’re going to play most is the bet per 2 lines, which varies from $0.01 to $5. That gives you a full betting range of $0.10 to $250. 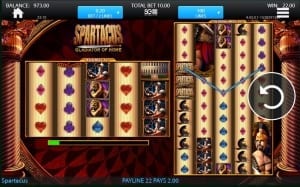 The wild symbols, along with some regular stacked icons, will pay the maximum amount of 5x the stake per winning combo. Given the number of lines, you can tell that there will be the possibility of winning up to 500x the stake, or $125,000.

95.94%, the Return to Player (RTP) which has been announced in Spartacus, is a number that’s quite high, close enough to the 96% figure that many expect to see in modern games.

While many of the features included in the game are considered regulars, you can expect to find some rarer options as well, and the two sets of different sizes would definitely fall there. You have the lines spread across the two, though 80% of the combinations formed will be on the colossal set.

Stacked symbols are also part of the deal. They involve both the wild symbols and two of the highest-paying positions, with the low-paying ones landing on two or more positions at a time as well.

The wild symbols are the ones which have the Spartacus logo in them, and you will find that they land stacked on the reels, in both game areas. The difference between the two is that when a wild symbol manages to cover a full reel on the normal set, it will be transferred to the matching reel from the colossal set as well. The wilds will expand there, so they will be 12-symbols high on their new reels.

Other things to note about these wilds is that they can act as substitutes, and that in the right circumstances they will pay you directly, offering the top jackpot.

The Coliseum feature symbol, or the scatter as most games call it, is available on the same three reels, in both game areas. The 1st, 3rd and 5th columns are the culprits. To trigger a feature, the game will require that at least three Coliseum icons are present in the game. These symbols are taken into account from both areas.

3, 4 or 5 scattered Coliseum icons will get you 8, 12 or 20 free spins, along with cash rewards of 2x to 20x the stake. Expect to see Nudging Wilds present during these rounds, so getting a full stack wild and seeing it transferred to the colossal reels is going to be easier. 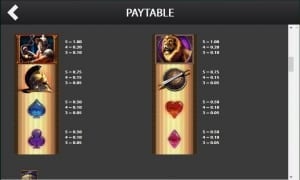 There are some decorations around the game area, which sort of match the Ancient Rome look, but for the most part there isn’t a lot there to work with the theme. Some lower symbols with card suits exist, along with helmets, swords and shields, lions, gladiators or the game logo. The main regular symbols will feature images of Spartacus and of a female warrior.

For WMS, it feels like a regular release, with a decent looking design. It’s not going to look good if you put it next to a release from a developer like NetEnt, Play’n GO and others which work exclusively online.

Spartacus is not your standard slot machine, which is often a plus for a game, and it has the right features and RTP to make it a good pick for a lot of players.