The tropical version of Siberian Storm is now available, and it’s called Sumatran Storm. The slot keeps many of the original graphics, changing the background and some of the features though, so you end up with a different game, not just a clone. The creator of these slot machines is IGT, a top developer in the casino industry.

With a setup which uses 720 ways to win, via the MultiWay Xtra system, the slot machine has 5 reels which have different sizes (3 to 5 symbols). Wins may form both ways, and they will pay up to 1,000 coins for each combination. That’s not all you’re getting, with the wild symbol, scatter and free spins being present among the features which may trigger at any point.

Activating a round of Sumatran Storm is doable with as little as $0.60, which would give a value of $0.01 to each of the 60 coins that are obligatory. In exchange for those 60 coins, the game will activate all its ways to win, 720 possible combinations being the result of this. At the other end, a wager of up to $50 per line/coin and a total bet of $3,000 will make Sumatran Storm an appropriate choice for high rollers as well.

You get a lot of ways to win in this game, so naturally you can often get several winning combinations at a time. There are wins of up to 1,000x offered on each of those ways to win, so even though it might not seem like a huge amount, the jackpot can add up quickly under the right conditions.

Sumatran Storm is not that different from other releases that are coming from IGT, and in fact it looks like a clone of other slots of theirs feature wise.

For starters, the slot relies on ways to win, but in a system called MultiWay Xtra, which IGT trademarked. They’re including 720 ways to win inside, on 5 reels with 3-4-5-4-3 symbols. The combinations will form both ways, which is the one thing that makes it different from the competition’s offer.

Represented by the image of a Golden Tiger, with the Wild logo on the side, this feature is usable in the game as a way to form new combinations. Thanks to the ways to win system, the wild’s presence on a reel is enough to include it in a combo, so there is no need for a certain position to be reached. Wilds are usable on the reels 2, 3 or 4 and they are substitutes only for regular icons.

The game has a dedicated scatter symbol, designed to pay you, nothing more. You need it appearing 3 to 5 times, in order to take advantage of it and get a payout of 2x to 50x the stake. It’s the symbol with the gems and the Scatter logo. There will be no features coming from it. 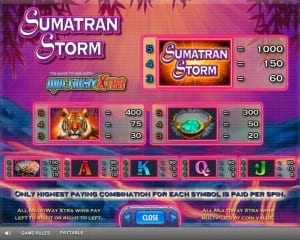 The story takes place on the island of Sumatra, and its main characters are the local tigers. There are images of these tigers in several of the slot’s symbols, along with their eyes, with logos or even jewelry that’s inspired by these majestic creatures. The downside is that the developer didn’t give up on the idea of the Royal cards either, and those will appear fairly often in low paying positions.

Sumatran Storm can deliver some decent features and a good theme, but neither is truly unique in IGT’s collection.