The Monopoly brand has been turned into a slot machine quite a few times already, and I found about a dozen different titles created for it, from three different developers. The brand’s owners are definitely not shy about trying to make money from it, and as WMS is one of the developers which got the rights to it, you get titles like Super Monopoly Money from them, though they also have releases like Monopoly Mega Movers or Monopoly Once Around Deluxe, among others.

5 standard reels are used in Super Monopoly Money, and the game will have 25 active lines on them. It’s the type of game where you can activate a Wheel Bonus at any point, the slot promising to pay as much as $250,000 inside. You have Jackpot symbols, several types of wilds, bonus icons and Free Parking, so it’s going to feel like a well-designed Monopoly game, built especially for the slot machine crowd.

It’s not the first time, and it will not be the last, that we see a slot machine which requires an extra bet to cover the features. You start with an initial wager of 25 coins to cover the 25 regular lines, and another 10 coins are added after that, for its features. The total bet has 35 coins, whose denomination is going to range from $0.01 to $3. As such, the range of a bet can be anywhere from $0.35 to $105. 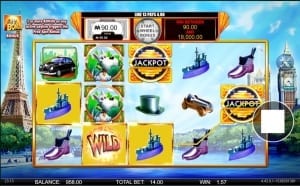 You can get paid well in several ways in Super Monopoly Money. I’d definitely look into what the Jackpot combo can offer, as five of those symbols can give you 25,000 coins, or as much as $75,000 from a single active line. The slot’s maximum potential for one round, a limitation put in place by WMS, is of $250,000.

Even with an extra feature bet in place, the slot still ends up paying as good as any new release, its RTP being announced at 95.97%.

Expect to find several special features which are related to the Monopoly board game in some way, so its fans will definitely have something interesting to try out.

These are marked with the Jackpot logo and with decorations made out of gold. They form regular winning combinations, but in order to get the most out of them you need a “pure” combo formed, with only Jackpot symbols. If there is a wild as well, then the combo pays only 500x, rather than 25,000x.

The wilds have a couple of versions, a regular one in a red logo, and a green one which is also called the MM Wild. Both are substitutes for all regular symbols, but not for the features, though the MM Wild is a bit better in that regard. The regular wild also seems to have some decent payouts to give away, up to 500x in fact for five on the same line.

The MM Wild can appear on reel 5, and when it does that it also expands to cover the reel. Instead of regular money, you get Monopoly money from the slot, during the rounds where the MM Wild is present. If that round doesn’t have any wins, then you get a random cash prize, of 10x to 100x line bet.

This one you can get via Free Parking symbols which appear at least once on the reels. The feature places five icons in front of you, and you choose one. A symbol will be revealed, and all Free Parking icons will be replaced with it. If you’re lucky, you will get the MM Bonus or the Wild from this picking feature. Otherwise, you get one of the three symbols present on reel 1 that round. If you have Jackpot symbols on reel 1, then you get wilds instead from the pick.

Access to the free spins is usually done via scatter symbols, and that’s how WMS approached the feature in Super Monopoly Money as well. The presence of 3 to 5 Bonus icons gets you 8 to 15 spins for free. The downside is that symbols are needed on adjacent reels, left to right, so their position does matter somewhat. The feature can also be obtained via MM Bonus symbols, which are given via the Free Parking feature, but the reward comes as Monopoly money in that case.

You can trigger this feature by clicking on the Wheel Bonus option. It will spin and will pay a prize, anywhere from 1x to 100x the amount that you had as Monopoly money when you triggered the feature. You could also get the Chance option, which gets you a pick between cards and multipliers as high as 200x. Community Chest is another feature which you trigger via the Wheel Bonus. The 12 chests each pay 1x to 25x multipliers, with Award All giving you all prizes at the same time. Go-Respin is the final option on the wheel, and it gives you multipliers of up to 200x. 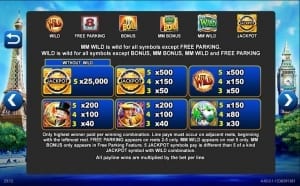 With about a dozen different Monopoly themed slot machines available right now, it’s clear that there is a lot of competition for this game. The advantage that I see for Super Monopoly Money is in the design quality, the work done in its case being ahead of what I’ve seen from its competition. It’s one of the better designed Monopoly slots, so it’s got its special place at the top.

Symbols will all revolve around the Monopoly game, so you have Mr Monopoly as a symbol, along with his dog, with bags of money and with the various tokens which you could use to play (boat, car, hat, shoe, etc).

If you want to play a Monopoly themed slot, there are few that are as good as Super Monopoly Money. It can pay well, it has a high-enough RTP and plenty of cool features, along with a better than average design.