Triple Diamond is the sort of game that I’d expect to find in a bar, an older slot machine with classic action and symbols, which hasn’t gotten with the times and so it looks quite dated. There are some good things going on here, but only if you really insist on playing this sort of game, and you have no better alternative. IGT is the company responsible for its release.

The game has been released with 3 reels and with a total of 9 active lines, while for the best possible rewards it offers, you could get as much as 1199x from each combo that is formed. Even though this is considered a classic, you’re looking at the option to use wilds with up to 9x combined multipliers, something that should make the action exciting.

You get to pick the amount that goes into each line, while at the same time you can decide on how many lines will be active. There are 9 lines at most to use, and for each one you spend between $0.10 and $3. That allows for a complete betting range of $0.10 to $27.

The game gets rather exciting through the multipliers which can be applied, and you will learn all about them below, but ultimately they don’t influence the top jackpot’s value. Three wilds will pay the 1199x top jackpot, when they form a combination.

For a classic slot machine, the RTP that’s been announced by IGT isn’t that bad. It’s at 95.06%, below average for an online slot, but decent for a 3-reels title.

When you’re playing a classic, you shouldn’t be expecting any huge features from it usually. Triple Diamond is a bit different from the classic of a couple of decades ago, but its look remains a dated one and there isn’t that much variety in gameplay to make it truly special. Still, expect for its multipliers to make things exciting.

This is the only feature that has been implemented in Triple Diamond, yet it’s also very exciting. We’ve seen something similar in other slots with 3 reels, sometimes even with bigger multipliers, so this isn’t 100% unique.

The feature adds the Triple Diamond logo to the reels as a wild symbol, though it will be used in this role only when it appears once or twice on an active line. Should three Triple Diamonds land together, they form a combination and they pay 1199x the line bet.

Having one wild take part in the formation of a combination will triple the value of that win. The 3x multiplier that’s applied by one wild is multiplied from the one from the second, should two such symbols contribute to a combo. The total multiplier would reach 9x in that case.

While 9x multipliers can make wins a lot more exciting, with their help you get at most 900x from a regular combo of Red 7s. The better payout is still the 1199x which comes from three wilds forming their own combo. 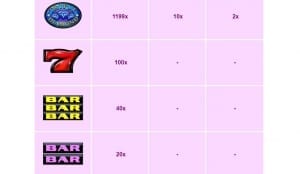 The classic slot machine is called that way for a good reason, it’s been around for more than a century. Many of the symbols which were used in that initial period are still used today. It’s not an exciting look for a slot machine, offering things like logos, red 7s or different types of Bar logos (1, 2 or 3 stacked and colored in teal, pink or yellow). If you’re looking for a good looking classic, there are some out there, but Triple Diamond is not one of them.

Triple Diamond mixes the classic slot experience with some exciting wild multipliers, but I’m not sure that it will be enough to get it on the radar of most players.