Vegas Baby serves us a retro side of Las Vegas, which points to the early days of the world’s greatest gambling destination. You have IGT to thank for this release, one where the graphics are just what was needed. It’s not the only Las Vegas based game you’re going to get access to, but the chosen look is better for a retro style game than usual.

Playing Vegas Baby will be possible via as many as 20 active lines, placed in a game area of 5×3 reels. The game has a top payout of $250,000 that it can deliver in a single round, while features will include wilds, scatters, several multipliers and free spins.

One of the things that is different about this game is the possibility to select both the number of lines and the line bet. The majority of the IGT slots tend to keep their lines fixed, so this is different. It’s one more way for you to reduce the total bet, though I’d recommend you don’t change the number of active lines.

Vegas Baby is quite the generous game in terms of potential, as its best wins will pay even up to 10,000x. Expect the wild symbol to be that generous, or at the very least for it to contribute by boosting wins through its multiplier.

The RTP that’s announced for Vegas Baby isn’t very exciting, the developer announced it as a range of 93.65% to 96.46%, but it’s not very far from an acceptable figure either, as it appears to be somewhere around 95% as an average between the two.

Expect from Vegas Baby to be the sort of slot machine that will give you several cool features, so even though there isn’t something unique in there for you, the excitement is real.

For starters, the game benefits from the presence of a wild symbol. You have it in the form of a Welcome to Vegas Baby sign. It will behave as a regular symbol in many ways, as it will form combinations with the other wilds and will pay as much as 10,000x at the same time. You can form a combo with as few as two wilds lined up from left to right.

It’s also the wild though, and when it’s used in that role the symbol will be a substitute and will help you form new winning combinations. This happens whenever wilds and regular symbols are on active lines together, from left to right. The wild has the added benefit of a 2x multiplier, with which it will double the win of that combo. Wilds aren’t expected to act as replacements for bonus symbols.

Using the second feature symbol of the game, the Bonus logo, this feature needs the triggering icons on 3, 4 or 5 positions at the same time. This will have the effect of triggering 15 free spins. For the entire duration of the free spins, the pays are tripled. There is only one combo that can’t pay triple the usual amount, and that’s the jackpot which is paid for five wilds on a line.

There will also be additional rewards given by the slot, in exchange for 2 to 5 Bonus scatters on the reels. You get up to 100x total stake thanks to them, before the free spins start up. 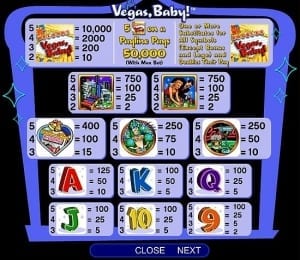 The look of Vegas Baby is inspired by retro style slots and by an older Las Vegas at the same time. They’ve created some Royals for the low paying positions, but the better ones have cartoon style images of cocktails, stacks of money, exotic dancers and gamblers enjoying their time in one of the early Vegas casinos. I know that the game is slightly dated, but the retro look it sports really works for it.

Vegas Baby has plenty to offer a player, and so I think it’s a slot machine that I can recommend. Its multipliers and 10,000x payouts make it an interesting choice.