With graphics that appear to be taking us to late 19th century London, Werewolf Wild is one of the best looking slot machines I’ve seen Aristocrat release, and for that alone it’s worth a look if you’re a fan of their work. They actually appear to be telling a story inside, and we’ll make sure to give all the details about it in our review.

First, a look at the game’s way of getting you paid. It’s a slot with 5 reels which relies on the use of regular lines, 25 of them forming in the game area. The best combinations will pay 1,000 coins, while as features you will encounter the wild symbol, mystery features, scatters or free spins.

You can set up a wager as long as you multiply the amount you use on one line, with 25. You have 25 coins in each wager, and so with denominations between $0.01 and $2, you get a bet of $0.25 to $50. The range is varied enough that it should allow anyone to play it, even with the lines being fixed.

Don’t expect here the sort of slot machine that would pay a big amount, its best combination will only give you 1,000 coins, or $2,000 per line. The features help a bit, and scatter symbols can offer 50x the bet ($2,500). It’s also not out of the realm of possibility to get several lines formed in a round, or getting the free spins to improve your wins.

This game has low to medium volatility, so frequent smaller wins are to be expected inside. The long-term Return to Player is set to 95.3%.

For its features, the game mostly gives you the usual options, so perhaps the developer relied a bit too much on pretty graphics and not enough on unique or exciting features. It’s a reversed situation, compared with some of their other slots.

The title of the game says it, and it was obvious before it even loaded that the wild symbol would be present in the form of a Werewolf. You see the creature in it, with a red blood-like background, but there are good reasons to be excited to see it, rather than afraid. You have these symbols so that you can use them as replacements, getting them to form new wins. They will do this for most symbols, the regular ones at least.

Werewolf Wilds, appearing left to right and forming a combination with anywhere from 2 to 5 symbols, have prizes to give away which vary from 10x to 1,000x.

This is a limited symbol, which you only get on reel 1. Its appearance there will give you an instant prize, which has a top value of 40x the bet.

Moving on to the scatter, this one is coming in the form of a Werewolf’s silhouette against the image of the Full Moon. Getting these symbols to appear at least three times, even if they’re scattered, can trigger for you up to 28 free spins.

This is a random feature, which can transform five of the symbols from the reels into wilds. There is no way to trigger it via symbols though. 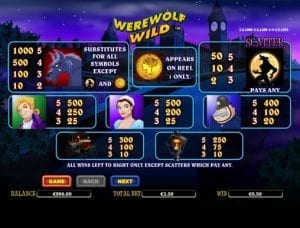 I’ve said it before, but I really like what Aristocrat did with the graphics of this slot machine. They chose cartoon-style graphics of high quality, and in fact the style of the design reminded me of the animation movie Beauty And The Beast, a Disney title. With the action set during late 19th century or early 20th century London, you have the image of Big Ben in the background, while the reels get carriages, street lights, but also images of police men, nobles, young ladies and werewolves. The only ones ruining the look a bit are the usual Royals.

I found the game to be enjoyable, mainly due to its theme and graphics in this case, while features are more on the average side. You have a low-medium volatility slot here, so winning often is likely, even if it’s smaller amounts.