One of the original Wheel of Fortune slot machines from IGT’s collection, this game has managed to give us an entire collection of titles that make use of this type of feature. It’s a hugely popular type of game for IGT, one that uses mostly its features and huge potential to attract players, and it manages to do a great job at that. The version that we’re looking at here is called Triple Extreme Spin.

Layout wise, it’s more complex than other Wheel of Fortune slot machines, with its 5 reels implementing 720 ways to win, a system that you typically see in modern titles. A rather impressive win, of up to 10,000x, can be yours if you get the right combo, but the action can also be improved via wild symbols, a Mini Wheel Bonus, scatters and the Triple Extreme Spin.

Look in the bottom left corner, to find all your betting options. The game lets you know that it needs 50 coins in the bet, and that you get 720 ways to win in exchange (a pretty good deal). You can start off from the minimum coin value of $0.01, and then go up from there, even up to $500 per spin ($10 per coin). 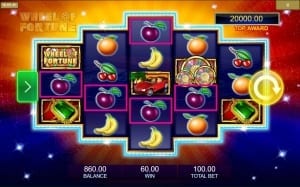 One of the best potential rewards in this game will be in the form of a regular combo, one which pays 10,000 coins though. Its value can be $100,000, for just one combo formed while using the maximum bet.

The best possible outcome will be coming from the feature called Triple Extreme Spin. Its highest potential can be even up to 60,000 coins, which is an incredible reward.

We’re given an RTP range of 92% to 96.08%, so the actual value is somewhere around 94%. It’s not a great probability that you’re going to walk away with a profit, and it’s actually below the average.

As you’d imagine, the big focus of Wheel of Fortune is on features that have a Wheel style inspiration, but there are some regular ones as well.

The wild symbols will be reserved for appearances on the three middle reels. The appearance of the wild there will allow it to participate in the formation of new combinations, together with matching symbols found on neighboring reels. These wilds are not capable of taking the place of any feature icons.

Activated via symbols with large Scatter logos for their image, this small feature needs three triggering symbols in any position. A Mini Wheel will spin and will pay 50x to 3850x to the player, depending on the outcome.

The bonus symbol which gets you this feature has three wheels shown in its image. It’s another scatter, so you need it appearing in any position, but at least three times. The feature lets you make a pick first, from some envelopes, to win some additional yellow, blue or red pointers that correspond to the wheels. Get 3+ same color pointers, to win prizes of 100 to 250 coins.

The three wheels will spin then, and will stop on certain values. The Blue Wheel has values between 30 and 1,000 coins to give. The Red Wheel pays 100 to 5,000 coins. The Yellow Wheel gives a 2x to 10x multiplier, which will apply to the wins obtained from the other wheels. 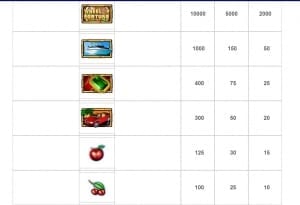 This being a modern version of the Wheel of Fortune, it’s going to look the part with its 5 reels which sport 3 to 5 symbols and with the ways to win system. The quality of the symbols is also quite good, with some positions reserved for the usual fruits, while others have images of jewelry, sports cars or cruise ships, things you might win at a Wheel of Fortune spin. Don’t go in expecting some huge production, IGT doesn’t offer that even in its most popular releases.

Wheel of Fortune is an extremely popular series from IGT, and this particular slot has a lot to offer in terms of possible rewards. It’s also looking better than the average Wheel of Fortune slot.