You’re on a mission to find prizes in this Aristocrat slot machine, one where you’re looking at a mining operation from the Gold Rush era in America. Where’s The Gold features an old man in the role of the gold miner, a fairly standard choice in slots that pick this particular theme.

As for the offer that’s made in the game, the player has 5 reels which are occupied by 25 active lines. It’s a top payout of 1,250 (50x the bet) that you’re getting from the best five symbols available. Luckily, there are also scatters and free spins with extra wilds, all great features that will improve your experience.

Anyone interested in just seeing how the game plays like, can spin its reels and spend as little as $0.01 per line that is activated. You can have a wager of up to $100 selected for the round as well though, where for each line you’d use a $4 coin. This way, you can go after a bigger prize, or you can spin the reels as a way to have fun with a game, spending as little as possible in the process.

The Gold Miner is the best one to get if you’re after a regular combination, something that you repeat over several lines and get an overall bigger prize this way. Each combo it forms can pay up to 1,000x. If we look only at the best five symbols in terms of rewards, the scattered Dynamite will be the one you want, and its payout will be 50x the bet (1,250 coins).

With an RTP that’s set up at 94.9%, Where’s The Gold is going to give you decent odds of landing a profit long-term, being close enough to the offer that’s made by most slot machines online. There is room for improvement though, and quite a few do indeed go above 96% RTP wise.

The list of features in Where’s The Gold is not a terribly long one. The game offers only scatters and their free spins for the base game, but there is more to be obtained from this feature after that. The downside I’m seeing is the lack of a wild symbol for the base game, something that’s become a staple of the modern slot machine.

Dynamite Sticks, regular symbols for a gold mining operation such as this one, will be used in the role of scatters. Symbols appearing three, four or five times in view will get you a reward of 50x, 250x or 1,250x, based on a wager of 25 coins. This means that you can win 50x the bet with just five symbols.

The cash prize isn’t the only one that you’re going to get out of those symbols. A small bonus feature starts next, with the gold miner finding free spins and extra wilds for you. You can have a maximum of three golden wilds, these being Royals that are transformed into wild symbols for the feature’s duration. 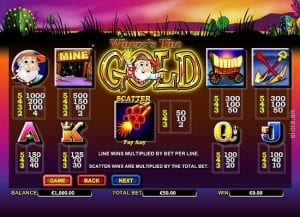 The theme is based on gold mining, as it would’ve been done during the Gold Rush period, not in a modern day industrial operation. The usual white haired gold miner is getting the main role, with the dynamite sticks, wagons, mining tools and mine entrance as the other big symbols.

Quality wise, you’re looking at a fairly dated design, not something you’d be that impressed with. It’s cartoon-styled and its main character is easy to love though.

Where’s The Gold is a game that Aristocrat designed with few features, though once you get them chances are that you’re going to get paid well. Graphics and RTP wise it’s not the best slot around either, staying mostly on the average side.