Wolf Rising is a wolf themed game, one of several which IGT is making available in their collection, alongside titles like Wolf Run. It’s going to quickly become clear to you that the slot doesn’t have typical action, thanks to its use of mega reels, but some of the other features will be familiar to you.

A very unusual type of setup, which involves 5×8 reels and a total of 100 active lines per spin, it will be able to deliver big wins of up to 1,000 coins with each combination that is formed. The game will also offer stacked wild symbols, bonus symbols and free spins, all good features to have, though somewhat common in slot machines.

It’s not typical for a slot machine from IGT, but Wolf Rising does allow for the number of lines to be selected. The options are to have 1, 8, 25, 50, 75 or 100 active lines for the huge game area that is used. You choose what the line bet will be like as well, and the range appears to be $0.01 to $5. The maximum bet allowed can reach $500, while all lines can be activated with as little as $1 per spin. 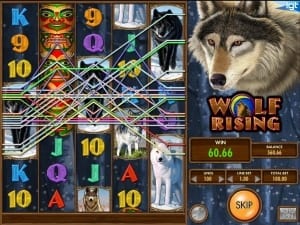 Don’t go in expecting a huge reward to be visible. The game makes use of a lot of lines, and from each one you can get a win of up to 1,000x. The stacked nature of the triggering symbols makes it possible to have a screen filled with top paying combinations, so the highest potential appears to reach 100,000 coins for one round.

As usual, IGT is giving us a range for the Return to Player percentage. The figures are 93.37% at the lowest, and 96.05% at the highest. Falling somewhere in the middle of that range, the real RTP is quite low overall, especially for an online slot.

With such tall reels and 100 active lines, this could only be a special type of game, and the features help make it look that way as well.

The game will use stacked wild symbols, which is something quite special since each reel has 8 symbols. These very long stacked wilds, which look like Native American Totems, will be substitutes for the majority of the symbols that you get inside, the bonus symbol being the exception.

Wild symbols are also going to form winning combinations on their own, paying up to 1,000x when that happens. Given the stacked nature of the wild, it can create a lot of wins in a single round, and in fact it’s likely that you’re going to get more than one to trigger.

The only other feature symbol which you’re going to have at your disposal is going to have a Bonus logo, with a monster drawing behind it. With three such icons on the middle three columns, you get paid a small amount (2x the bet) and you win 5 free spins.

The look of some of the symbols will change, but they end up paying the same. The three Bonus symbols can re-trigger the free spins, adding an extra 5 rounds to the total. 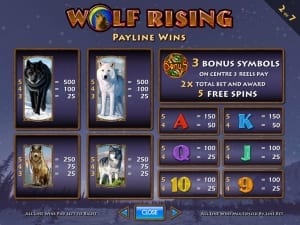 The game’s unusual design doesn’t help with its look, the tall reels just end up looking awkward, but it’s not a bad design either. In some cases, you have symbols with Royals which come in different colors, while major symbols are going to be triple-stacked wolves, bonus symbols and reel-high stacked Totem Wilds. A decent looking slot machine overall, so you shouldn’t have any issues with it.

Wolf Rising has the big con of a below average RTP, but other than that it could prove to be a fun game to play.