Wolf Run is part of a collection available from IGT, one which focuses on the Native American representation of the wolf. This wild creature is the game’s main character and as such you will find it represented both in its natural form and as a totem, the kind that the Native American tribes might worship. A second version of this game exists, one which has a Megajackpots progressive attached.

Expect a game area with 5×4 reels which has 40 fixed paylines for you. Each one can deliver wins of up to 1,000x, which is a pretty good reward. On top of that, the game mentions features such as bonus symbols, free spins or wilds.

The wagers which are placed in Wolf Run will start from a relatively small amount, of just $0.01 per line or $0.40 total. They can go much higher though, the game mentioning values of up to $50 per line or $2,000 per spin. This makes it one of those games which everyone can play, from low rollers to high rollers. 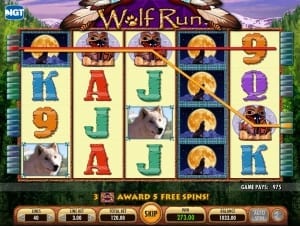 With the big prize in Wolf Run reaching 1,000 coins in its best combinations, the total amount that will come your way is as high as 40,000 coins. That’s the highest potential of this game, which could become true if you had a screen filled with wilds in a single round.

As you can see, the game has some potential, but as the RTP will reveal, it’s not the sort of game that you can count on in the long run. Its lifetime RTP is going to be somewhere between 92.50% and 94.98%, and no matter which of the two extremes you go to, it’s not going to be satisfying.

The features are also fairly boring here, one more thing that the game has as a disadvantage. I haven’t found anything too exciting or unique inside.

Showing us the image of a lone wolf that’s howling at the Full Moon, this is the wild symbol and it’s going to be useful to you in several ways. Wild symbols will create wins by themselves when they are aligned on an active line, 3 to 5 symbols connected, and at that point they would pay 50x to 1,000x. Those are in fact the best payouts that the game will deliver.

In other situations, the symbol will be the standard substitute, which will end up making spins profitable often enough. Wilds are not replacements for other types of feature symbols.

The second type of feature symbol that you’re going to see on the reels is going to be the Bonus logo. Shown against the image of a Dream Catcher, this is a scatter and a symbol that you will only find on the reels from the center. The three reels will need to get just as many scatters, so that you can get a 2x reward and 5 free spins.

With the free spins active, the only thing that changes is the look of the symbols. They gain darker backgrounds, but they remain the same icons and they pay the same amounts. You still have the wild symbol, along with the option to re-trigger free spins via 3 Bonus scatters, and the potential appears to remain the same. 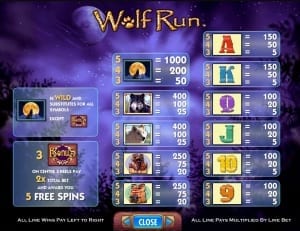 Wolf Run is not the type of game that stands out in a major way. It’s got a below average Return to Player, average graphics and features that you can find in other slots as well. Overall, it’s a game that’s fairly easy to forget.