The board game Yahtzee was popular enough in the real world at one point, that its fame still carries on to today. It’s been fairly popular for WMS in land-based casinos, so they’ve turned the game into an online title as well. This branded release is based on a Hasbro property, same as with Monopoly, another board game which got a lot more attention from WMS.

The online slot version of Yahtzee gets 5 reels and there are 25 paylines to populate the game area. You get the game’s jackpot as an excellent motivator to keep playing the slot, plus there are features such as the Party Bonus, wilds and Roll icons, which will keep things fresh. The ultimate win of the slot appears to be a jackpot of $40,000.

For the ultimate payout of the slot, you have the Back to Back Yahtzee Jackpot as the target, with $40,000 being its maximum value. At 20,000x the stake, it’s actually an impressive return for the investment that you can make in this slot.

Most likely depending on the choice that you make in the game, the RTP will vary between 94.89% and 96%, so it has at least a decent chance of paying back the player, similar to what’s available in other slot machines.

Several of the features included in Yahtzee are built with the original game in mind, so that its fans will find the slot appealing. That’s exactly the way to go with a branded release, so WMS did pretty good in this case.

On the reels 2 through 5, you may notice symbols which are marked Wild. If you’ve played slots before, you know what this means, they’re substitutes which are to be used in combination with regular symbols. They make the average round more profitable, which is always a plus. You can’t use them in combination with the Roll or Bonus symbols.

4 to a Yahtzee Free Roll Bonus

Accessing this part of the game is possible only if you have all five scattered Roll icons visible. You also qualify to win the top jackpot, if you had the maximum bet selected that round. Luckily, you only need $2 to reach that point. If you don’t have all five Roll icons, you can still get something out of the slot, since it offers rewards for 3 or 4 symbols as well.

The game will give you access to the Yahtzee Bonus through the Bonus symbol, which you get on the 5th reel. It triggers automatically after you get five symbols, or you do it manually if you have at least one. There are several rolls of the dice, and depending on their outcome you can expect different prizes. Getting five of a kind on the first roll will pay the most, $3,500. If you don’t get even a pair after three rolls, you trigger the Chance Bonus.

The Yahtzee Jackpot is offered when a player uses the maximum bet, rolls a Yahtzee while he’s in the 4 to a Yahtzee Free Roll, and after that he gets a second Yahtzee in the next roll. 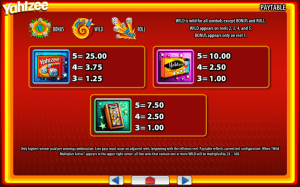 I found the Yahtzee design to be a very well done one. It’s entirely inspired by the dice game and by the pairs of players which are enjoying it. It looks like a game show almost, with the different couples competing among themselves on the reels. You also get pizza, pop corn, sodas and various Yahtzee boxes. Overall, there is plenty for the Yahtzee fan to enjoy here.

With jackpots of 20,000x the stake, good graphics and a theme that a lot of players will resonate with, Yahtzee should be one of the fun games in the WMS collection.